Cindy Peden Chapman currently is Director of Community Relations for the Westbury Civic Club (WCC), one of the largest subdivisions in Houston with almost 5000 single-family homes, and served as WCC President from 2008-2010. While she was President, the WCC won awards two years in a row from Keep Houston Beautiful for volunteer projects which improved Westbury esplanades. The WCC also won awards from Keep Houston Beautiful and the national Keep America Beautiful for creating the Westbury Community Garden on vacant land leased from the Houston Housing Authority. 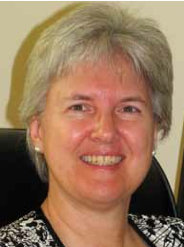 Chapman also serves on the board of park advocacy group Willow Waterhole Greenspace Conservancy and on the boards of two local civic advocacy organizations with both residential and commercial members: the Westbury Area Improvement Corporation and SWHouston 2000. She earned a bachelor’s degree in Chemical Engineering from Clemson University and a master’s degree in Chemical Engineering from the University of South Carolina before moving to Houston with her husband, also a chemical engineer, in 1988.

“Westbury has recently been annexed into the Brays Oaks Management District, so I am honored to serve as an ambassador from the Westbury area on the board. Since the management district has been an immediate neighbor to the Westbury Super Neighborhood, I have worked with them on many common interests in the past. It is exciting to join the board in time to participate in the development of the district Service Plan for 2013
and beyond.”