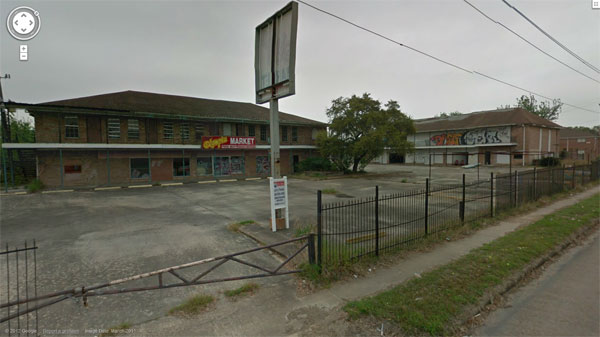 Dangerous buildings which have bedeviled the Westbury community for most of the past decade finally met an end Monday as a demolition crew began knocking them to the ground.

The properties, located at 12540 Hillcroft, have been vacant since 2008, but even before that contributed an ugly mark to the community as a “wrought iron company” used the buildings to store and work on dilapidated cars which were ultimately shipped to Mexico. At that time, six pit bulls roamed the premises as guards, residing in an upstairs lair.

But with the renter’s eviction, the buildings, originally a strip center built in 1972 according to tax records, continued to deteriorate, with owners fighting the city’s attempts to clean up the property. Graffiti marred the walls, the roof caved in, neighborhood residents saw young people on the property, and finally, a fire in 2011 – one day after a city inspection – gutted most of the remains.

The city’s Neighborhood Protection Division tried for years to get the property cleaned-up or demolished, but owners essentially thumbed their noses at the tickets and adverse decisions they received.

In 2010, the property was listed as owned by Chau M. Pham, who lived in Sugar Land. In 2011, when the City of Houston pursued clean-up of the property before the Building and Standards Commission, Chau’s son Steven represented his parents at the hearing. And although Chau was ordered to repair or demolish the buildings or be fined $1,000/day, once again, the site only got worse.

The buildings are next to the Pines of Westbury apartments and they back-up to Westbury’s prize-winning community garden. The Westbury Civic Club and the Westbury Area Improvement Association kept the fight going to rid the community of the blight for years, and on Monday, their efforts were finally rewarded.

View this article and others at village-southwest-news.com