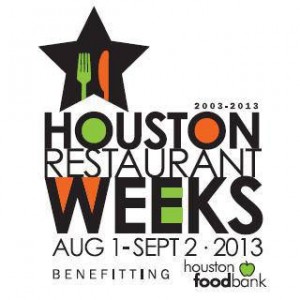 Houston Restaurant Weeks has announced its return for its 10th year, a month-long food odyssey run by volunteers, in which 100 percent of the proceeds raised from area restaurants go directly to the Houston Food Bank. For 33 days, participating restaurants in the Greater Houston Area as well as in outlying communities will prepare a prix-fixe menu, in which a percentage of the cost goes to the Houston Food Bank. A $20 two-or-­three course lunch generates a $3 donation; A $35 three-or-four course dinner generates a $5 donations; A $45 three­-or-four course dinner generates a $7 donation.

Last year alone Houston Restaurant Weeks raised over $1.22 million for the Houston Food Bank, making it the largest single fundraising event for the Food Bank and the largest restaurant weeks of its kind in the United States. In addition to the ever-expanding contribution made to the Houston Food Bank, Houston Restaurant Weeks has grown to include restaurants in the Greater Houston Area as well as in outlying communities.

Save the Dates for Houston Restaurant Weeks 2013!

List of 2013 participating restaurants and their menus will be posted on houstonrestaurantweeks.com July 15, 2013.

Houston Restaurant Weeks was established in 2003 by Cleverley Stone, host of “The Cleverley Show” on CBS Sports Radio 650/KIKK-AM Houston and contributor to Houston’s Fox 26 Morning News. To date, the event has raised more than $2.9 million to fight hunger in Houston. The HRW team of volunteers donate their time to produce the event so that 100% of the donations raised go directly to the Houston Food Bank.