TIME AND PLACE TO REIMAGINE HOUSTON TRANSIT IS HERE

METRO wants your help redesigning its transit network. This blank-sheet approach is a challenge few cities have taken on and one that cannot be done without the community’s input.
One way to get involved is by sharing ideas on the Transit System Reimagining Project website.

The 18-month-long project, spearheaded by Board Member Christof Spieler, seeks to transform transit. In a recent episode of METRO Matters, Spieler said that now, as METRO prepares to open new rail, is a great time to rethink transit. “The goal is to come up with an easier system to use that benefits and carries more people.”

The new website includes: general project overview and schedule, interactive service-planning tools, presentations and meeting documents, a comment page and a survey. METRO wants community members to take the online survey as their feedback is critical to the process. The survey invites input about choices and priorities, and tells METRO about the choices being made. Responses will help the authority better understand and determine priorities for the region’s transit system.

The project involves redesigning the local bus network and engages transit experts, the general public, as well as a diverse task force made up of stakeholders representing neighborhoods, employment districts and local agencies. Transit System Reimagining is a short-term project that will utilize METRO’s resources to redraw the transit system, establish goals and develop a five-year service plan to meet those goals. 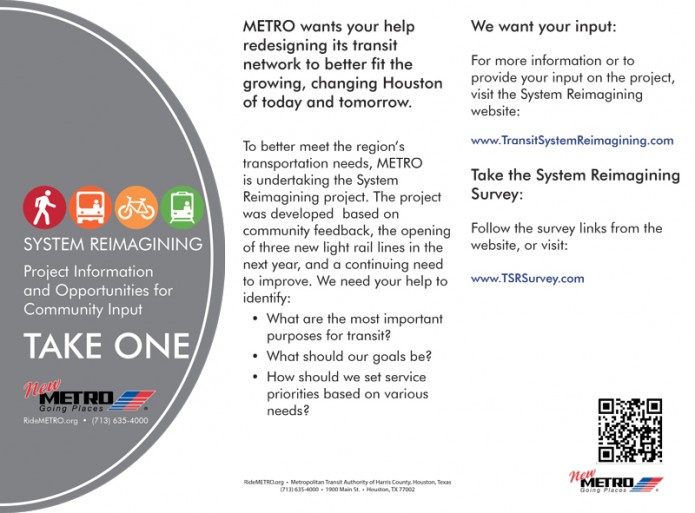