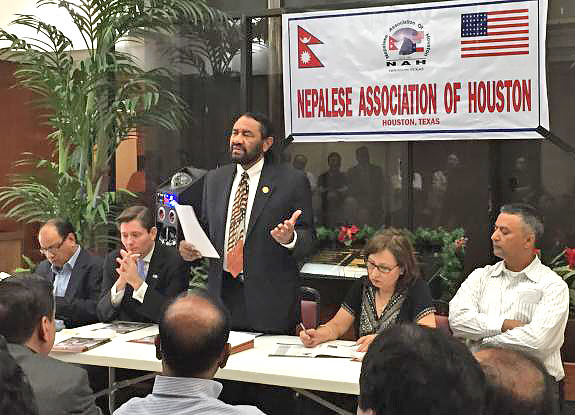 “The people of Nepal have suffered a calamitous tragedy, and I think providing TPS is necessary to help them attain a sense of stability in the United States while their country recovers,” Congressman Al Green said.” A great nation does not force people to return to conditions that are unsafe and detrimental to their well-being. A great nation extends the hand of friendship to all during times of challenge and crisis.”

Under H.R. 2033, the Nepal Temporary Protected Status Act of 2015, applicants would be eligible for TPS if they had been continuously and lawfully present in the United States since April 25, 2015, which is the date when the earthquake took place. The legislation would grant TPS for a period of 18 months following the date of its enactment. Additionally, the applicant should be admissible as an immigrant, except as otherwise provided under section 244(c)(2)(A) of the Immigration and Nationality Act.

Congressman Al Green also addressed a Nepalese Community Meeting and press conference, as well as attending a candlelight vigil hosted by the Nepalese Association of Houston. He discussed aid efforts by the US government and the current conditions in Nepal. United States Agency for International Development (USAID) representative Marty McVey also was present at the meeting, press conference, and candlelight vigil.