The Brays Oaks District is a Proud Partner in Public Art 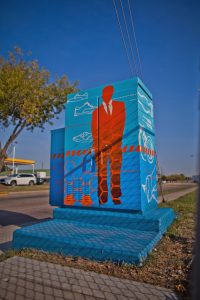 Residents and visitors to the Brays Oaks District take notice of the multiple mini murals that have been painted over formerly grey electrical boxes. Several artists, commissioned through a citywide beautification initiative in partnership with UP Art Studio and the Brays Oaks Management District, have added a little spice to major thoroughfares like Gessner, Braeswood and Fondren. The mini murals are not the only eye catching public art pieces sprinkled throughout the area, however. Keep an eye out for these interesting pieces of eye candy:

The Red Man by Clinton Millsap: Roark @ West Bellfort – The bright red and blue are certainly eye catching, but what makes you give a second look is the life-sized “man in red.” The honeycomb overlay, and sense of movement added with the tennis shoe outlines capture the hustle and bustle essence of the district, which is crisscrossed by some of the city’s busiest streets.

Rocket Raccoon by Anat Ronen: South Gessner @ Creekbend– As you drive down Gessner, you are sure to come across this mini mural by Anat Ronen. Ronen, known for her affinity for animal subjects, painted a playful raccoon. The animal peers out at you from his “home,” and brings a smile to drivers on their commutes. 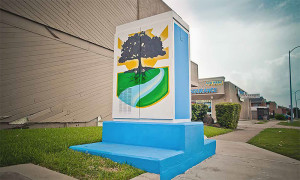 Brays Oaks Logo by Pilot FX: South Gessner @South Braeswood – We may be a little biased, but this is one of our favorites in the district. The Brays Oaks Management District logo shines bright, and reminds residents and visitors of the wonderful oaks and beautiful bayou that make this such a great place to live.

“We Are in the Business of Changing the World, SS,” by Tara Conley : South Gessner Division Police Station – The honeycomb theme appears yet again in this Houston Arts Alliance-funded sculpture by local artist Tara Conley. The metallic honeycomb is intended to evoke the relationship between the community and the Houston Police Department as an interdependent, mutual relationship. Conley says the name of the sculpture comes from a collection of phrases she believes portray the nature and purpose of the police department.

As time goes by and the community grows in Brays Oaks, the arts will surely grow as well. Keep an eye out for these pieces and many others.