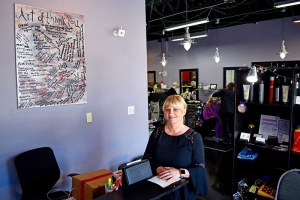 Rhonda Dean of Dean’s Hair Design poses at the salon’s reception area, where her “Art of Thank You” still hangs from when she moved to Brays Oaks eight years ago.

Hard to say which group is more eclectic at Dean’s Hair Design in the Brays Oaks Management District — the clients or the stylists.

From rockers to classical musicians, from young teens to seniors coming in with the aid of walkers, you’ll always find an interesting mix of people looking to spruce up their look at the salon, located at 9814 Hillcroft Ave., Houston.

Owned by longtime Houston hair stylist Rhonda Dean, the salon also features one part-time receptionist who will graduate with her cosmetology license this summer and one employee, Cinthya Verde, originally from Venezuela, as well as a number of other stylists who rent space from Dean and draw a wide range of clients due to their unique backgrounds.

There’s Mary Grantham of Willis, Texas, who has done hair for 50 years starting when she was 17 years old. When she’s not doing hair at Dean’s, she is crew foreman of the wig department at the Houston Grand Opera. It makes for long days and nights but Grantham, who is 70, doesn’t appear to have plans to put her comb and scissors down.

And neither does Margaret Colunga, who works at a church during the days and cuts hair Friday nights and Saturdays simply because she likes it, according to Dean.

Connie Richards does dog agility training and also cuts hair at Dean’s. Dawna Wells used to do hair in the Montrose area and now her clients come to Brays Oaks.

“I am big on having a salon of different styles,” said Dean, who moved her salon to the Brays Oaks location eight years ago. “Everyone brings something to the table.”

Johnie Megna used to strictly cut men’s hair in an upscale barber shop in a Houston professional building before moving to Dean’s Hair Design. Her father and grandfather, both from Italy, were barbers, and she followed in their footsteps. Just as she decided she also wanted to start doing women’s hair, a chair became available at a new salon in Brays Oaks called Dean’s Hair Design, Megna said.

“We have people here from age 2 to 102,” Megna said, as she applied highlights to a female client’s hair.

Previously located at U.S. 59 and Shepherd, Dean said she decided to move the salon when a space came open in Brays Oaks because she lives nearby, allowing her to pop in to the salon much quicker if needed.

“Because my clients come from all around, I took the chance,” she said. “I would say 90 percent moved with us, but we have gained many more than we lost.” 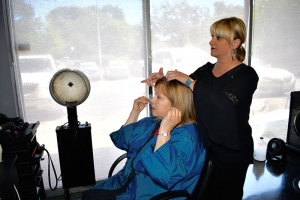 Originally from Moline, Illinois, Dean met her husband, Kelly, a music teacher at Emery Weiner School, in the 1980s. At the time, he was traveling with a rock band. They moved to Houston in 1992. Kelly Dean plays the saxophone, the piano and sings. He is in two bands, a variety band that plays weddings and events and a funk band called TKOh! He is also often a guest of the Houston Symphony.

Just recently, TKOh! played the Willow Waterhole MusicFest 2018 in the Brays Oaks District but without Kelly because he and Rhonda were in New York City to see their son Chandler’s senior show. Chandler, who graduated valedictorian from HSPVA in Houston, is graduating from Fordham University in May, where he majored in political science and television/film. Currently, he is interning for Stephen Colbert and has previously interned for Seth Meyers and Samantha Bee.

The Dean creativity and talent extends to the couple’s twins — Olivia and Rebecca — who are 19 and university students majoring in theater and dance at University of Houston (Olivia) and psychology at Texas State (Rebecca). Rebecca has already started an annual music fest at her dorm at Texas State.

The Dean family’s ties to music and the arts, as well as stylists of diverse backgrounds, explains the mix of clients at the salon on any given day.

Business has been good at the Brays Oaks location, Dean said. The large and free parking lot makes it convenient for her clients to come to appointments, and the more affordable location also allows her to keep her costs down and provide reasonable prices for her services. “I have more client retention that way,” she said.

She has had support from all over the city, including from Robin and Kurt Bollman, who allowed her to lease a small space in their salon, Morpheus, when she was working on her current shop.

Two days before she opened the salon in Brays Oaks, Dean said she was lying in bed thinking about how she could thank everyone who helped. The next day, she got a large canvas and created thank you art instead of thank you notes.

“I’m not a painting artist, but I kind of like my simple approach,” Dean said. The artwork remains over the reception desk as you walk into the salon, where you have to be buzzed in but the door is open to everyone.