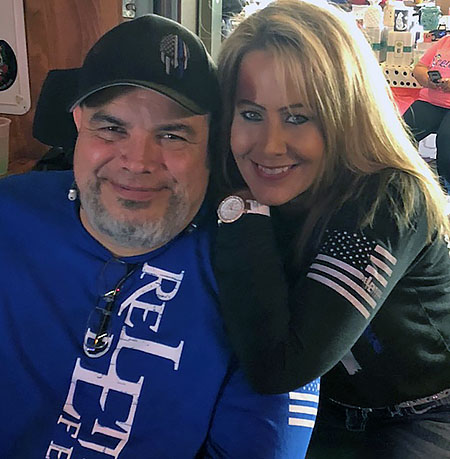 Momentum isn’t just about mass and velocity, sometimes it is about spirit, determination, and unexpected moments that buoy spirits and reinforce our beliefs that anything is possible.

Ronny Cortez has momentum. After months of physical therapy, stem cell injections, tenacity and prayers – Ronny Cortez has moved his legs and taken some steps. As his wife Sheri tells it, “He never doubted he would make progress.”

On February 28th 2017 HPD veteran officer Ronny Cortez was shot multiple times while attempting to apprehend an armed burglar. Ronny was taken by EMT’s from the scene with several bullets in his body, one of them lodged in his spine causing paralysis. In April 2017, his recovery was further complicated by a stroke. The stroke robbed Ronny of his vision, and right sided dexterity. Since last February there have been multiple surgeries, endless physical therapy, and adapting to a new and forever changed life.

Ronny has been doing stem cell injections every 2 months since February 2018 and there appears to improvement from these therapies. First, he experienced throbbing sensations in his legs which, as a paraplegic, was significant news. The second major sign of progress has been muscle movement. Sheri told us he moved his legs to sit up. It wasn’t planned or premeditated, rather a spark of unconscious muscle memory, but surely indicating a pathway exists for possibly more deliberate motion. In early August they had another great sign. Ronny was doing aquatic therapy and while leaning too far left he moved his leg to regain his balance.

Additionally, Ronny is standing on his own for up to twenty minutes at a time. The local ABC-affiliate noted this great news with an update on Officer Cortez in May.

Doctors are not certain what is contributing most to Ronny’s improvement. Certainly, his unwavering, positive attitude and his support network – led by his wife Sheri – are key factors, but physical therapy and the stem cell therapy are also key. Doctors hope his body will “continue to connect the dots” through continued therapy, helping combine the unconscious movements with his own deliberate thought and action.

One of the challenges Ronny faces with this type spinal injury is the significant scar tissue from the bullets that prevent the spinal cord from healing. Amazingly, his most recent MRI shows a large portion of the scar tissue appears to be almost completely gone. This has surprised the doctors, along with all the muscle mass of his legs remaining unchanged – unexpectedly considering the paralysis – the doctors think there is a real chance for continued improvement.

Through it all Ronny’s spirits have never wavered. He continues to have an amazing attitude and never lets anything phase him. Brays Oaks Management District is lucky that a hero like Officer Cortez called our area home and protected our neighborhoods.