The Fund was established in the hours following Tropical Storm Imelda’s landfall to meet the needs of those who were displaced and/or whose homes were damaged by the flooding that followed.

The effort between Mayor Turner and Judge Hidalgo is in cooperation with the Greater Houston Community Foundation (GHCF), an organization with deep knowledge of the community and expertise in disaster relief charitable work.

GHCF previously administered the Hurricane Harvey Relief Fund (HHRF) on behalf of the City of Houston and Harris County after Hurricane Harvey struck the region in August 2017. The fund will work with nonprofit organizations that are vetted and have experience to deliver support to affected residents.

“While the giving spirit of the Houston area knows no bounds, storms such as Tropical Storm Imelda and Hurricane Harvey never observe government boundaries. Imelda displaced people and damaged homes on both sides of the city limits. It is crucial that the city and county move forward as one to help coordinate charitable assistance to the victims. That’s why I am joining with Judge Hidalgo to launch this campaign,” Mayor Turner said 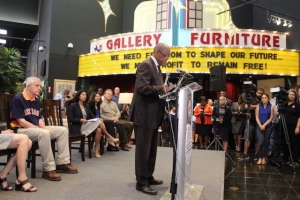 “All of us have a role to play in helping our community recover from Tropical Storm Imelda,” said Harris County Judge Lina Hidalgo. “Today, there are dozens of communities across the county still digging out from this disaster, and they deserve all the support we can offer. For those who can help, please consider donating financial assistance through this fund. It is one of the most powerful things you can do to help survivors get back on their feet.”

The announcement took place Monday at Jim “Mattress Mack” McIngvale’s Gallery Furniture in north Houston. During the storm, he generously opened his store to people stranded by high water on nearby streets and neighborhoods.

“I promise the citizens that my involvement in this very important project will be to help the city and the county move along quickly, so we can relieve the suffering of so many people,” said McIngvale.

Recovery resources for Houston residents are available at HoustonRecovers.org.
Residents with questions about Imelda recovery can also dial 311 in the City of Houston or 211 if they live in Harris County.