Houston Mayor Annise Parker danced and posed for pictures with residents at a National Night Out event in Brays Oaks Oct. 1. The mayor stopped at Northfield I and II on Valley Hills Drive––the last of her four appearances across the city to promote the interaction of neighbors looking out for each other.

“This is the 30th anniversary for National Night Out and this has to be some of the best weather we’ve ever had,” the mayor said. “There are couple of reasons why we do National Night Out. It’s about keeping each other safe and learning as a community what we can do––neighborhood by neighborhood––to interact with the police and be safe.”

Before partying with residents, the mayor thanked Northfield Civic Club President Vincent Sanders for inviting her to the event. She also recognized the staff of her Citizen’s Assistance Office (Department of Neighborhoods) who were present, passing out “It Can Wait” rings to remind people not to send text messages while driving.

The Northfield gathering provided a variety of attractions for children and adults, including prize giveaways, an inflatable moonwalk, music and a variety of refreshments. Several area merchants and service providers participated with sponsored tables and announcements.

Sanders estimated the turnout was at least 250 over the course of the evening. 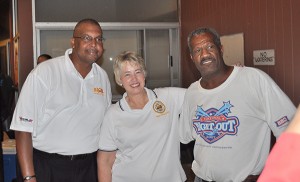