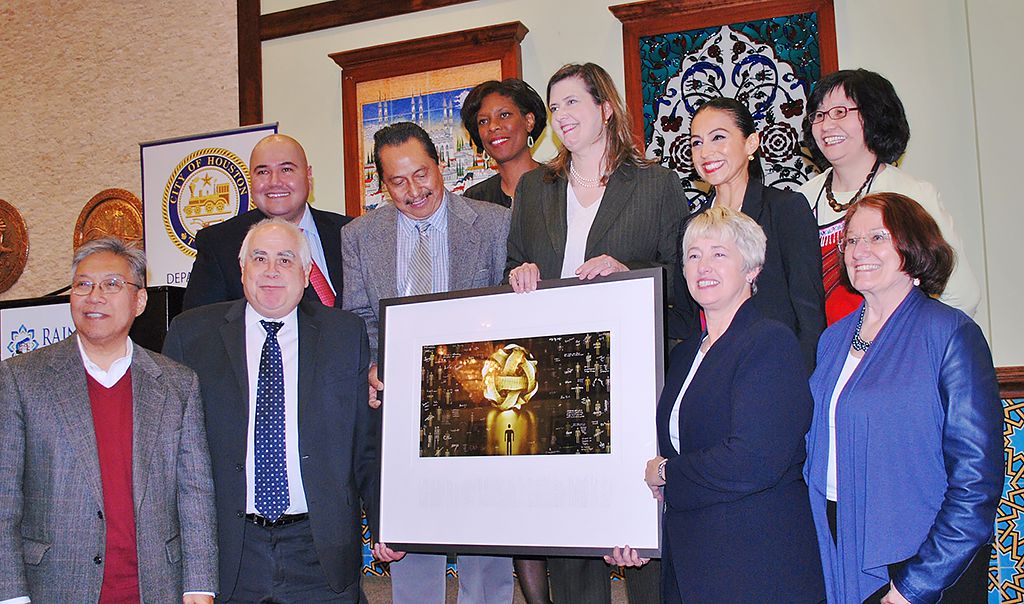 Outgoing Houston Mayor Annise Parker and First Lady Kathy Hubbard were honored Wednesday, Dec. 16 at an event called “Around the World for the Holidays” at the Raindrop Turkish House.

The holiday event was hosted by the Advisory Council of International Communities, the Citizenship Month Advisory Committee, and the Department of Neighborhoods to recognize the accomplishments of the mayor during her three terms in office.

Terence O’Neill, Division Manager of the Office of International Communities, cited the mayor’s many initiatives to aid immigrants and refugees making a new home in Houston’s international community, including creating the Office of International Communities, launching Citizenship Week which evolved into Citizenship Month, and creating language access programs. He also lauded the mayor for creating the first human trafficking task force, and participating in the National Collaborative for Immigration Reform.

In her first term, Parker met with more members of Houston’s Consul Corps than all of her predecessors combined, O’Neill said. In appreciation for her advocacy, the host organizations presented Parker and Hubbard with a work of art they had both seen and admired, “In this Light, I See..” by Taiwanese artist Yu-Ru Huang.

“This is a big city,” Parker said. “One of the amazing things about it is that is filled with unexpected places where people from all over the world come to build their futures and raise their families.”

“With mutual respect and tolerance, we can come together and make amazing things happen,” she added.

The mayor spoke about how much Houston has evolved since her parents first began their lives here in the 1930s, and said the city has become more and more international every year since then. Because her family hosted foreign exchange students and sponsored both Vietnamese and Cambodian refugees as she was growing up, she has had firsthand experience with the needs of refugees, she said.

“I wanted my administration to recognize their challenges and smooth their path,” Parker said. “I’m happy to have done a few small things to make life easier–not just immigrants and refugees, but everyone.”