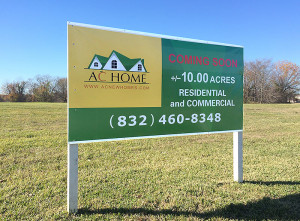 For all the Brays Oaks residents that have been wondering what the “New Homes” sign on the west side of South Gessner north of West Bellfort portends, the mystery has been at least partly solved. AC Homes, a Chinese investment and development firm closed on the property on Friday, December 11. The firm has previously done development in the Dallas area. Although district staff was unable to make contact with anyone at AC Home, we were able to talk to the broker that represented them, Mr. Ben Ho with Texas Midland Realty.

According to Mr. Ho, AC Homes plans to develop around 100 homes on the 9.46 acre tract indicating that the new subdivision will be a high density development. The new homes will be mostly 2-story, 3-bedroom ranging from 1,300 square feet to 2,300 square feet. Prices will likely range from the 170s to the mid-200s. Since AC Homes is not a builder in its own right, it is looking at several Houston area homebuilders to construct the new homes to its specifications. Preliminary architectural designs have already been completed, according to Mr. Ho. However, no timeline has been set for the start of land development or home construction at this time. Also, no name has been decided for the project.

The Brays Oaks District is happy to learn of this important news. It has shown the property concerned along with others suitable for single-family development to a number of Houston area developers and builders over the past five years without success. It is hoped that this project will stimulate interest among some of these builders in undertaking new housing projects of their own. Equally important, the district hopes the new subdivision will help the district’s efforts to attract new retail store names and full service restaurants to the area.