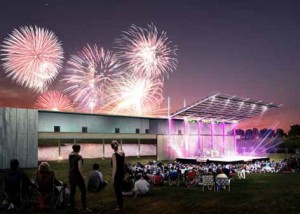 While residents of the Westbury neighborhood already enjoy the sounds of nature and birdsong in the Willow Waterhole Park, many are looking forward to the time when music will fill the nights, as well.

Plans for a Levitt Pavilion to host 50 free music concerts a year have been underway since the Willow Waterhole Greenspace Conservancy first contacted the Mortimer and Mimi Levitt Foundation in 2012. In 2013, it was announced that Houston would be the site of the eighth in a series of Levitt Pavilions that have sprung from underutilized spaces across the country.

While negotiations and paperwork have delayed fundraising and construction, Howard Sacks, President of the Friends of Levitt Pavilion Houston, remains optimistic that the ball is rolling now.

“We aren’t really able to do full fundraising until we have signed multi-party agreements,” he added. “These are in the process of going back and forth and being revised. We think that we have more of that behind us rather than in front of us and that’s encouraging.”

The construction fundraising goal is $7.5 million, Sacks said, but that phase cannot begin until the agreement is completed.

“When we have a document that the parties agree to, then it has to be approved by City Council, and I’m optimistic that can happen by fall,” he said.

“What’s also cool is that all parties seem to be intent upon the same goal, which is making Levitt Pavilion happen at the Willow Waterhole,” Sacks said.

“It’s taken literally four years––four years since July––that we learned of the opportunity,” Sacks said. “The delays really stopped mattering. It’s almost as if the people who stay the course are the ones with the potential to be rewarded. And there aren’t any shortcuts.”

While fundraising is in a holding pattern, there are already some encouraging signs to help the community envision the music venue to come, he pointed out.

“What’s extraordinary is that the Harris County Flood Control District––in their earth-moving capacity––has prepared, visually, a site for the Levitt Pavilion,” Sacks said. 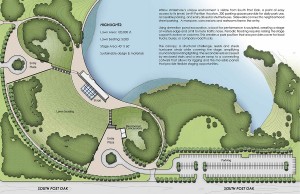 “If you take a look west of South Post Oak between Willow and Gasmer, you will see quite a sight that’s already pretty indicative of what the Pavilion is going to look like––the tiered seating and the saddle that’s the midpoint of the seating,” he said. “It’s fairly easy to imagine, along the flat bank, the seating facing west, the Pavilion facing east, and the water behind it.”

Each Levitt Pavilion features open-lawn seating with no benches, high-caliber entertainment from all music genres, and state-of-the-art sound and lighting equipment. The Houston venue is expected to accommodate 5,000 concert attendees.

The first Pavilion was launched by philanthropists Mortimer and Mimi Levitt in Westport, Conn. in 1973, followed by additional pavilions in locations such as the formerly crime-ridden MacArthur Park in Los Angeles, Calif; the brownfields of an old steel mill in Bethlehem, Pa.; and the Memphis, Tenn. park where Elvis Presley once performed; as well as in Pasadena, Calif. and Arlington, Texas. A seventh pavilion in Denver, Colo.’s Ruby Hill Park is expected to be completed by 2017.

Since opening in 2006, the Willow Waterhole Park has hosted a jazz festival and outdoor moving screenings for the Westbury community. The 280-acre park, which also serves as part of a $75 million flood control project with stormwater detention basins, is now a popular destination for picnics, birdwatching, and hiking trails.