Since the inception of the Brays Oaks Management District 11 years ago, the number of crimes committed has diminished by 22 percent, said Starla Turnbo of the District’s Public Safety Committee.

“Our vision is to grow the committee, reduce crime, and promote public safety,” she added.

Initiatives launched by the committee can be credited with helping achieve results, and the results are measurable, as the committee receives regular reports from local law enforcement to compare statistics from month to month and year to year. Capt. Bob Robertson of the Houston Police Department’s South Gessner Division is now one of the committee members, Turnbo said, and he provides the monthly statistics at committee meetings.

One program that has been implemented successfully is the Rental Credit Reporting (RCR) program, now in use at 97 percent of the apartment properties in the District. Turnbo said screening of potential renters covers not only their credit and rental history, but also checks for criminal history, including sex offenses.

The RCR reporting has had the added benefit of ensuring more stability and less mobility among renters so the turnover rate has lowered, she said. Brays Oaks Management District Executive Director Richard Rodriguez said the Houston Independent School District has noted this obvious and positive change regarding its students who live in the area.

Another program that has achieved some results is the District’s participation with the Harris County Attorney’s office to help close down after-hours clubs and game rooms operating illegally. The program has worked well in tandem with the District’s employment of mobile surveillance cameras.

“It moves people from that location and has helped with hot spot abatement,” Turnbo said. “People don’t want to be on camera.”

For example, the cameras have helped focus on a car wash located across from a school that has been a problem and a site of suspected drug activity for the last 20 years, she added. 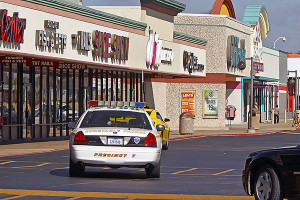 The District also offers a number of free programs for businesses and residents that help with overall public safety goals, she said. The graffiti abatement program assures that tagging and marking on public or private property will be removed within 24 hours of being reported to the District via a form on its web site. Community members may also report illegal dumping, blighted areas that need attention or trash pickup, or lights that have gone out and need to be replaced, she added.

Another program that has proved helpful is a free after-school bus service that the District started and supports, which currently serves Welch and Fondren Middle Schools and Westbury High School. Although the bus service was designed to transport apartment-dwelling students, others who live within walking distance of the apartments may also ride, Turnbo added.

“We’ve been working with the principals of these schools and they love it,” she said.

Turnbo said the committee is actively seeking input from the community on its initiatives.

“We are looking for more partners for the Public Safety Committee, and we’d love to have other community members participate,” she said.