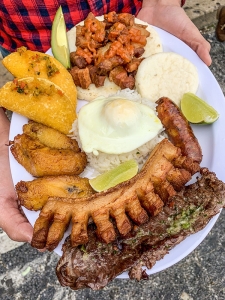 With over 50,000 Colombian-Americans living in Houston, our metropolitan area has become a fantastic place to find Colombia’s signature dish: the Bandeja Paisa. Parrilla Colombiana, a restaurant in the Brays Oaks Management District, is no exception. A visit to this hidden gem reveals a menu representing Colombia and Latin America, with a few noteable splashes of Mexican spice thrown in for a Houston audience.

Pulling into the discrete shopping strip, you’ll also a taqueria, pupuseria, a Mexican restaurant, a Salvadoran gift shop, and an Ethiopian grocery store flanking each side of Parrilla Colombiana. This plaza sits near the intersection of Bissonnet and Hillcroft, two streets widely known for being highly multicultural.

The Bandeja Paisa is a hearty dish that can be eaten at any time of day. Traditionally consisting of a chicharron (fried pork belly), fried egg, avocado, white rice, beans, plantains, corn cakes, a strip of beef, and a sausage, Americans might see this resembling breakfast or brunch. Parrilla Colombiana makes sure to give their customers what they want: spicy salsa, despite the fact that hot sauce is not typically eaten in Colombia.

The Paisa region in northwestern Colombia is where this bandeja (platter) originates. It is believed to be a 20th century amalgamation of the various cultures that influenced Colombia, from the indigenous peoples to the colonialists. Although the dish is not technically the National Dish of Colombia, it is widely considered to be so.

Parrilla Colombiana serves theirs on the oval-shaped plate that has become a standard for its restaurant presentation. This carnivorous plate has an almost artistic flair with the large strip of chicharron with its meaty cubes attached to the fatty pork rind.

The thin strip of beef topped with chimichurri resembles a thin cut of fajita meat, while the sausage, the final piece of meat, provides a contrasting tender texture. Fried, sweet plantains will give you a break from your platter of protein. These delicious, plump, caramel-flavored fruits are typically served as side dishes as well as desserts in South and Central America, because they’re just that good. We happen to live in a city overrun with fried sweet plantains, and that is something we can be grateful for.

As Colombia borders the Caribbean Sea as well as the Pacific Ocean, it should come as no surprise that other dishes on the Parrilla Colombiana menu include seafood. The Cazuela de Mariscos (Seafood Casserole) contains shrimp, squid, octopus, clams, and mussels, all inside a mug. The Mojarra Frita is a fried Mojarra fish with a side of tostones, another version of fried plantains that have been flattened into thick chips.

The Calentao Paisa is another quintessentially Colombian dish with an interesting meaning: “reheated leftovers.” While of course Parrilla Colombiana makes this dish fresh every day, they recreate a typical meal of leftovers in Colombia: beans, rice, plantains, pork or beef, a fried egg, and an arepa. This dish is served between 9-11AM, a time when you might usually eat leftovers.  Among other Colombian dishes, this small restaurant serves much-loved meals from around Latin America and the Caribbean islands. This is not an out-of-the-ordinary fusion that they decided to create, but a realistic representation of the cross-cultural dishes that you would find if you visited this part of the world. Sancocho soup, for example, has regional variations in Puerto Rico, Honduras, Ecuador, Colombia, and more.  Eating at Parrilla Colombiana means opening yourself up to flavors across Latin America, the Caribbean, while remaining in Houston. As the most diverse city in the United States, we are lucky to experience these culinary traditions right in our own backyard.   Parrilla Colombiana