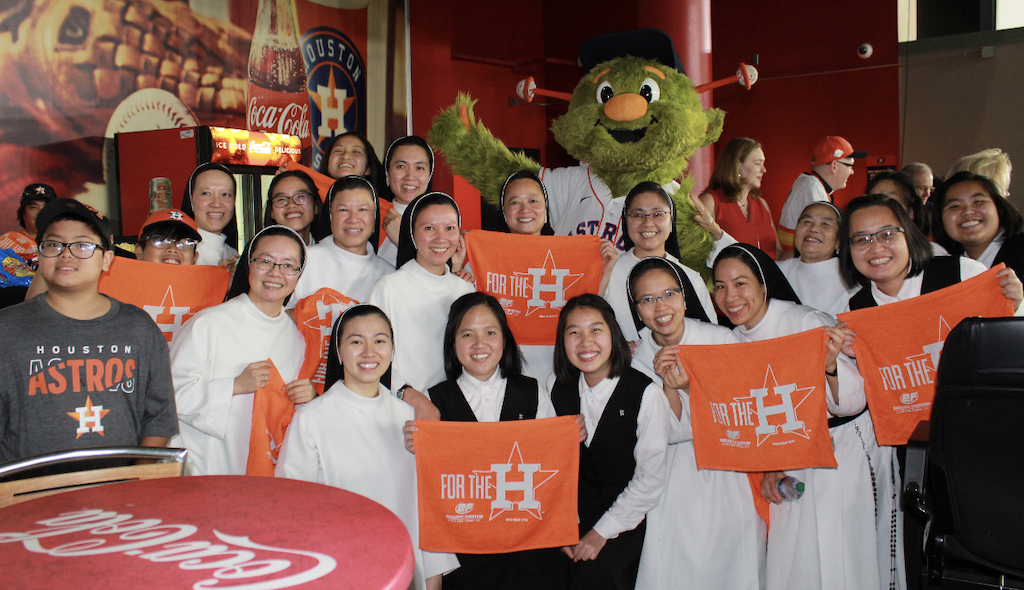 The Dominican Sisters of Mary Immaculate Province aren’t quite used to all the attention they are getting from Astros fans and the news media.

But now that they’re known as Rally Nuns, they are accepting their time in the spotlight with grateful hearts and speaking modestly only of the many good things that have come from it.

At 5250 Gasmer Drive in the Brays Oaks Management District, their Provincial House is a convent where their order of Vietnamese Dominican Sisters is focused on its ministry of preaching and teaching.

Usually their sports spectating involves cheering for student athletes whose teachers include some of the Sisters.

But Astros fever struck them, as it has taken hold of most people in our fair city as the team’s World Series games against the Atlanta Braves unfolds. 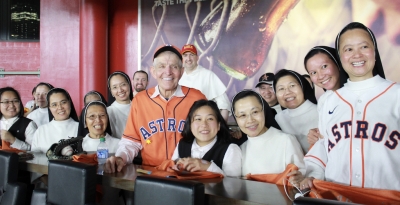 It began with a partnership with Jim McIngvale, better known as Mattress Mac, the philanthropist owner of Gallery Furniture. The Sisters have assisted him with the development of a pre-school education program, one of McIngvale’s latest charitable endeavors.

Sister Maria Theresa Nguyen, Provincial Superior, admires the businessman for doing great things, perhaps unknown, in the education realm. He started a vocational trade school that leads to high school diplomas, and now an early childhood education program because “his vision is to deliver (children) out of poverty through education.”

Through the pre-school project, they were at a dedication at the Gallery Furniture Store on Oct. 13 when Sister Maria Theresa asked McIngvale about the many Astros T-shirts she saw in a store display case.

“The next thing that happened is that he joyfully gave all of us Astros T-shirts and then he called me later and said he wanted to treat us to an Astros game,” explained Sister Maria Theresa. “While many of our Sisters grew up in Houston and are Astros fans, I did not know it was a playoff game. I only asked if it included food and drink.”

Their first Astros game courtesy of McIngvale was the first game of the American League Championship playoff against the Boston Red Sox. McIngvale hosted about 40 Sisters in Minute Maid Park’s Coca Cola suite with food and beverages included. Their evening included praying for the players.

McIngvale later called them with another invitation, to game six – which became the Astros victory that won them the American League pennant.

“He said we brought so much hope and light to fans, and he told us that he named us the Rally Nuns,” Sister Maria Theresa said. “He asked us to find one sister to throw the game’s ceremonial first pitch. We were so surprised at this great honor.” 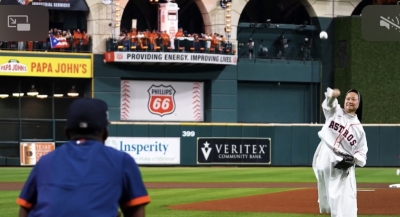 Sister Mary Catherine was selected to throw the pitch. She is a theology teacher at Shiner St. Paul High School, loves baseball and the Astros and has followed the team since 2005. Her throw that evening, and her tapping gesture on her wrist to imitate Astros star Carlos Correa’s “it’s my time” gesture, charmed the crowd.

The nuns’ “good luck” presence was noted by McIngvale, a deeply religious man. He wanted them to also attend the first two World Series games at Minute Maid Park Oct. 23 and 24.

“What a tremendous joy our Sisters have experienced through the generosity of Mr. Jim McIngvale,” Sister Maria Theresa said.

Sister Maria Theresa said much good has come from their exposure.

“It is beautiful to see how people are coming together in this healthy recreation, and giving our community hope during these times,” she said. “So many people have come up to us and said they want to go back to church, or our presence has deepened their faith. So many stopped going to church during COVID times. We assured people that God is still around.”

As local celebrities, they are fielding many requests for their appearance at fundraisers and other events. They welcome the attention as a way to share their love of God and their mission with so many more people.