The  “hidden gem” of a nature, recreation and flood control greenspace in the Brays Oaks Management District is sparkling even more with a gift from the Kinder Foundation to fund trails, land acquisition and other improvements.

Mayor Sylvester Turner announced that local philanthropists Rich and Nancy Kinder are donating $2 million to the Willow Waterhole Greenway’s Conservancy and pledging an additional $2 million to match gifts from others. The Conservancy aims to raise a total of $10 million for upgrades, which would also include trail connections to neighborhoods, additional parking, a pier, an outdoor classroom and improvements to a native prairie preserve area.

The Brays Oaks Management District’s helps maintain the Greenway along with the city Parks and Recreation Department and the Conservancy, and it partners with the conservancy on the property’s development plans. 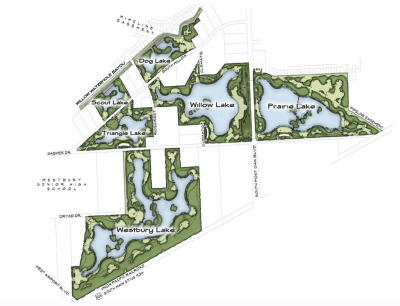 The District is also working with the Levitt Foundation on its future creation of an entertainment pavilion at the Greenway. And the District received $150,000 in Council District Service Funds from District K Council Member Martha Castex-Tatum to pave the Dryad Street (just east of Chimney Rock) entrance into the site. The project was finished in time for the Conservancy’s successful annual MusicFEST there on Oct. 30.

Together, the burst of funding is providing the Greenway with significant momentum.  It’s “secrecy” may fade soon.

“This investment from Kinder Foundation is transformational for us to reach our goal of creating a signature park on the southwest side of the city,” said Bill Burhans, Conservancy president. “The Willow Waterhole complex is a model for the future in Houston by combining flood mitigation, public greenspace, and nature conservation.”

“Willow Waterhole is truly a diamond in the rough that is poised to transform the quality of life of Houstonians in the southwest area of the city,” said Nancy Kinder, president of Kinder Foundation. “We admire the grit and determination of the conservancy’s leaders and volunteers for what they already have accomplished. It is time for Willow Waterhole Greenway to assume its rightful place as one of Houston’s great green spaces.”

Another gift from the Kinder Foundation enabled major improvements at Memorial Park.