Donors and dignitaries were among the 250 or so people who witnessed the historic groundbreaking on July 3 of the $12.5 million Eternal Gandhi Museum in Brays Oaks. The museum and inspirational learning center, slated to open in 2022 at 12379 Riceville Rd., will be the first of its kind in North America.

But it will not be the only important cultural and religious first in the Brays Oaks Management District. Close to the museum site is the nation’s only fire temple for members of the Zoroastrian religion. The District is also home to the region’s Turkish Center, India House and Filippino American Community Center, all on West Bellfort Avenue.

The Eternal Gandhi Museum will focus on the philosophy and life of the late Mahatma Gandhi, one of the world’s most important political and religious leaders of the 20th Century. The non-violent demonstrations he taught about in India led to the nation’s independence from the United Kingdom.

The museum is expected to attract visitors to Brays Oaks from across the United States and from other countries. The Dalai Lama, worldwide spiritual leader of Tibetan Buddhism, has provided his written endorsement of the project. 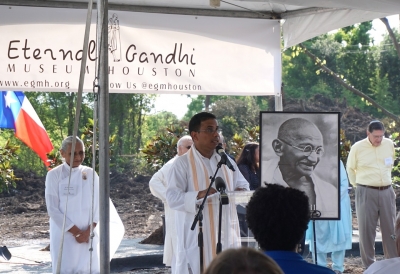 District Executive Director Ben Brewer submitted this written statement for the groundbreaking: “The Brays Oaks Management District is extremely honored to be the home of the Eternal Gandhi Museum for North America. The District’s board of directors, staff and the people it serves look forward to working further with the museum to spread the world-changing wisdom of its namesake and attract visitors from near and far.”

The District has also endorsed U.S. Rep. Al Green’s request to Congress for a federal community grant to help complete funding of the museum project, which raised its seed money mostly from local Indian-Americans.

Green was the featured speaker at the groundbreaking ceremony.

“The fight for freedom doesn’t end with one protest; it is a struggle, according to Gandhi,” he said, “and we all have to assume we are born in that the struggle for freedom not just for ourselves but for every living being on the planet Earth . . . our freedom resides in each other.”