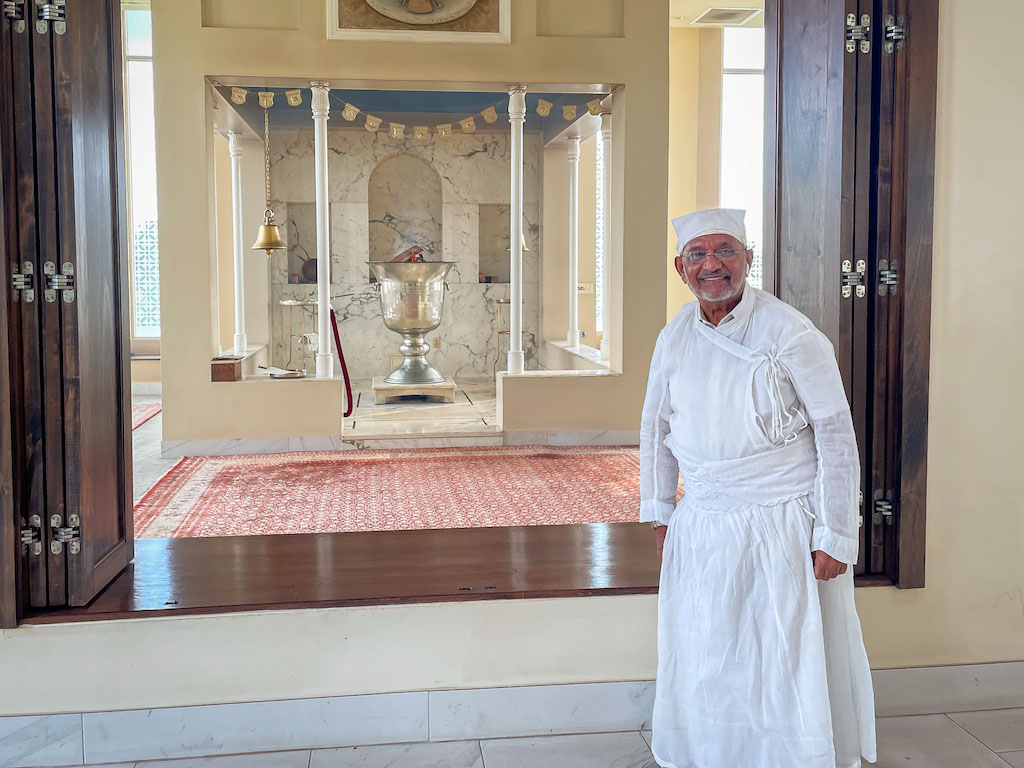 Since March 2019, the Bhandara Atash Kadeh has been the pride of Houston Zoroastrians, serving as the fire temple in all of North America for adherents of one of the earliest monotheistic religions — a faith once practiced across the entirety of the Persian Empire.

Past the dignified columns and through the temple doors at 8787 W. Airport Blvd. in the Brays Oaks Management District, a thin haze and the sweet smell of sandalwood is enough to make you forget the bustle of the nearby tollway.

The temple was donated by Feroze “Fred” Bhandara, a real estate developer and longtime Houston resident. Five times a day, an ervad, or priest, recites prayers in Avestan, the near-obsolete language of Zoroastrian scripture, and stokes a wood fire supported by a gleaming silver urn.

Through flooding, storms, or even a deep freeze, ervads tend to the perpetually-burning flame in the temple’s inner sanctum, continuing a centuries-old practice central to the religion, as the fire guides Zoroastrians in their prayers — the same kind of fire once brought to India by Zoroastrians fleeing persecution in Persia.

The largest concentrations of Zoroastrians are in India and Iran. Bhandara said that Parsis, or Indian and Pakistani Zoroastrians, make up about two-thirds of the community of about 1,000 people in Houston, while Iranians make up the other third.

Zoroastrianism directs followers to adhere to the three-fold path of “good thoughts, good words, and good deeds.” The religion is based on a lunar calendar of 30-day months, so important holy days don’t fall regularly on the weekends. As such, there is no mandate for Zoroastrians to attend regular weekly services.

Even so, on Wednesday evenings, a group of Zoroastrians, including Bhandara, attend services together after business hours. With the goodwill and cooperation of Bhandara, I, as an outsider and outright stranger, was able to sit in on the fourth of five daily prayer sessions, during which Zoroastrians focus their minds on the essence of the religion.

Bhandara, a native of Pakistan who serves on the boards of two management districts that border Brays Oaks, is a member of the older generation of Houston Zoroastrians who arrived in the late 1970s and early 80s. He’s soft-spoken and humble —  several times before and after the service, he parried away the admiration of other attendees of the service who appreciate how much he has done for their community.

Bhandara stressed the importance of welcoming outsiders to Zoroastrianism. As such, the Atash Kadeh itself is open to thanks to Bhandara’s directive and the overwhelming support of the Zoroastrian community. This contrasts with Zoroastrians of the Indian subcontinent, who maintain closed temples and prohibit converts to the religion.

Dr. Yasmin Engineer, a member of Bhandara’s generation who is from India, praised Bhandara’s more liberal approach to the religion.

“He’s done the right thing that we needed so much,” Engineer said as Bhandara spoke with me before the service.

After meeting Engineer’s husband and two attendees new to the temple, Bhandara encouraged me to observe as the service began.

Pervez Gonda, an amiable man who happily posed for a photo, was the ervad leading the service that evening. Clad in white linens, he recited prayers while attendees followed along using miniature copies of the Avesta translated into Gujarati, an Indian language.

Gonda said that he added sandalwood to give blessings to some Zoroastrians watching over Zoom. To the right of the fire was a camera on a tripod to live-stream the service, a practice begun during the pandemic that also suits the far-flung nature of the Zoroastrian diaspora. Engineer’s husband, Rustom, said that on Saturdays, Zoroastrians from Australia, New Zealand, and Dubai will tune in. 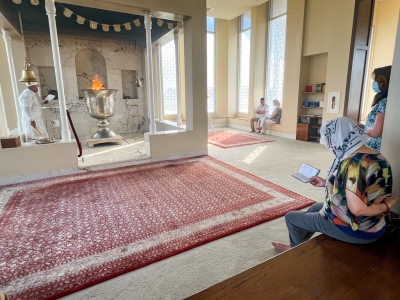 After the service, Bhandara took me to the Zoroastrian community center adjacent to the Atash Kadeh. The center was built prior to the temple and is home to a hall for festivals, Sunday school classrooms, and even a library curated by Aban Rustomji, a long-time Houston resident and former university librarian.

According to Rustomji, the community center started with $20-a-month donations.

“[A group of Zoroastrians] were meeting in different homes and hotels,” Rustomji said. “All of us decided that we have got to set aside money and start engaging.”

In the second phase of the center’s construction, Rustomji and the Houston Zoroastrians hosted a World Zoroastrian Congress in 2001 with over 2,200 people in attendance. In contrast, growing up in the high-altitude city of Quetta, Pakistan, Rustomji remembered seeing only 70 Zoroastrians in the first decade of her life.

“We had to show Houston how good the Zoroastrians are,” Rustomji said of the Congress.

Twenty years later, Rustomji noted that Houston has provided a place for the community to flourish. She detailed the multi-generational nature of Houston Zoroastrians.

“Right now, the older generation and the mid generation are at the Atash Kadeh,” said Rustomji.

Younger professionals take some time to come around, she said:

“Once [the younger generation] are married, have children, and the Sunday school friendships develop, then that’s when we go into the cycle of having different generations.”

Even so, a generation of Zoroastrians is entering the scene at the highest levels of the religion. Rustomji delightfully recounted meeting a young priest at an event at the community center in early June.

“I saw younger members of the priests that had just been ordained,” Rustomji said. “One must be in middle school. This is what the [community] center was built for – the different generations. To see three generations in front of your eyes being successful and bringing value to the center is a good feeling.”

According to Rustomji, the Zoroastrian community is uniquely composed of business people. To her, that spirit of entrepreneurship has made Houston Zoroastrians pioneers in North America.

“With business people, I find the psyche is different,” Rustomji said. “That makes a difference. We were the first ones to have an Atash Kadeh with a 24-hour wood burning fire. We’re the first ones that started Sunday school and have a youth camp. We want to live full lives within the community.”