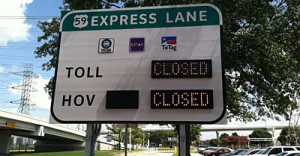 The new lane is similar to the one that opened on the Gulf Freeway a few months ago. Solo drivers with a toll tag will be given access to the HOV lanes during during non-peak periods. Metro CEO George Greanias says drivers will pay a toll anywhere between $1.00 and $4.50, depending on the amount of traffic