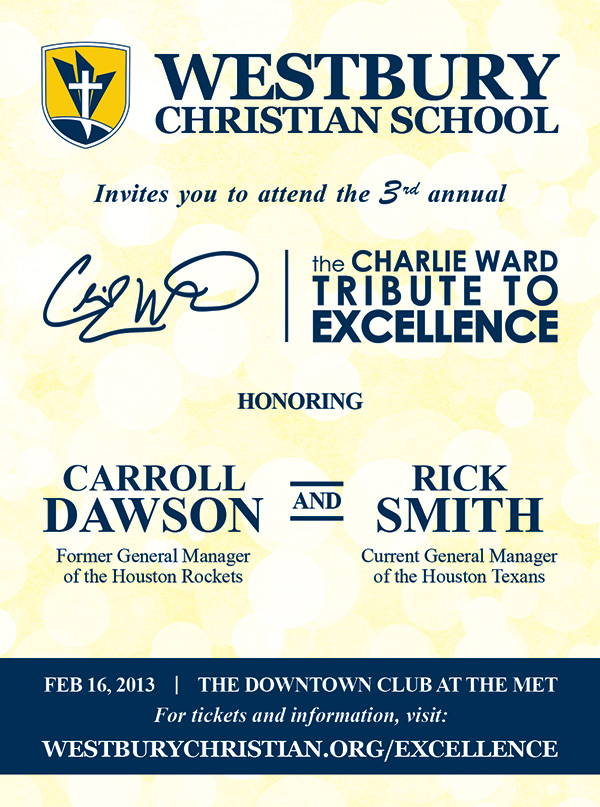 In the midst of one of the greatest sports weekends of the year, the NBA All Star Basketball Game, Charlie Ward and Westbury Christian School will honor two of the greatest influences in Houston sports history: Carroll Dawson, retired Houston Rockets GM, and Rick Smith, current GM of the Houston Texans. The event will take place on the afternoon of February 16, 2013, at The Downtown Club at the Met on West Dallas in Downtown Houston.

A native Texas originally hailing from Alba, Texas, Carroll Dawson retired from 27 seasons with the Houston Rockets organization in 2007. Dawson has either coached or arranged the deals that brought in nearly every star that has worn a Rockets jersey and is the only person to have served on the coaching staff of all four Rockets teams that advanced to the NBA Finals (1981, 1986, 1994, 1995). Carroll Dawson is technically retired but continues on as a consultant for the Rockets.

One of the top golfers in the NBA, Dawson resides in Houston with his wife, Sharon. Sharon has a daughter, Elizabeth, and a son, Michael.

Rick Smith is in his seventh season as Texans general manager and second as executive vice president, overseeing all aspects of football operations. Previously having served in coaching and personnel roles at his alma mater Purdue and with the Denver Broncos, Smith inherited a two-win team when he was named General Manager of the Texans on June 5, 2006, and has since worked closely with the coaching and scouting staffs to build the Texans into a playoff team by identifying and signing elite players who have helped produce an exciting brand of football. Smith has steadily strengthened Houston’s roster through the draft, free agency and trades. The fruits of Smith and his staff’s labor were never more plentiful and apparent than the successes of the 2011 season with the franchise’s first playoff berth and AFC South division title.

Smith and his wife, Tiffany, live in Houston with sons, Robert LaMar and Christian LaMar, and daughter, Avery Jordan.
For more information about the event, or to learn more about Westbury Christian School, please visit www.westburychristian.org/excellence, or call 713.551.8100.

Don't miss out
Subscribe to our newsletter and stay up-to-date with events in our community.
Subscribe
X
Go to Top