Since 1960, the campus of Houston Baptist University has a been a prominent asset in Southwest Houston, occupying 300 acres along Fondren between U.S. Highway 59 and Beechnut, bordered on the west by Memorial Hermann Hospital.

And since it opened its doors in 1963 to fewer than 200 students, the plans to grow and improve have never ceased. Today, a new master plan continues to expand the university’s vision.

“It originally started with concerns that there’s a fixed amount of land here, and a lot of the early analysis was based on ‘How big could we grow and what’s the capacity of the site?” said R. E. Corky Dragoo, a member of the President’s Executive Council and the leader of the university’s expansion project.

Dragoo said he had been retired, but had known HBU President Robert B. Sloan Jr. for a long time. About a year and a half ago, Sloan coaxed him out of retirement with a challenge to find out the best way to grow with the current facilities and the almost-30-acre plot where a struggling shopping center faces U.S. 59. HBU owns the property and has definite plans to upgrade its image.

The questions on the table, Dragoo said, were “What can we do to utilize that asset to help fund our facility growth? And can it enhance our academic programs and our image to the city?”

“About a year and a half ago, we created the next chapter of a master plan by looking at all our academic programs, where we’re outstanding, where we have opportunities for growth and what the current market is looking for,” Dragoo said. “We hired outside consultants to guide us through that process, and we put together a plan that incorporates not just the academic, athletic, and housing components of the university but also integrates those 30 acres at the corner of 59 and Fondren.”

“We originally considered doing some mixed use residential there,” he said. “As we stand today, we’re looking at predominately retail, restaurants and office space. Our market research indicates there is also potential for a hotel on that site.”

One component that is definite is a 5,000-seat basketball arena and parking garage, he added. The existing Christian bookstore and the FedEx store can continue to serve both the university and the public, but HBU is actively looking for other tenants whose presence will lift the center’s image.

“We have a retail developer––Property Commerce––who is, at this very moment, seeking potential tenants, for food, for retail and services,” Dragoo said. “It’s like a fishing trip. We’re not sure what we’re going to catch, but we’re prepared to take advantage of those who show interest. It’s an interesting period of time and we’re maintaining as much flexibility as possible. You move with the market opportunities.”

“We certainly want to have a major revision of everything out there in four or five years, but it comes in steps, obviously,” he added.

Before any of those long-term goals are visible, the university will lay out a new “welcome mat” with a new campus entrance off the feeder road of U.S. 59, he said.

“You’ll drive into a traffic circle–a roundabout as the Brits call it. As you turn left, there will be a connector road onto Fondren and there will be another into the campus,” Dragoo said. The engineering design work is underway now and that should be completed within a year, he added.

The football stadium at the other end of Fondren on the corner of Beechnut will host games by 2014, Dragoo said, and is rapidly nearing completion of its first-phase purpose as a practice field this year.

“The athletics expansion is exciting. There’s a lot of stimulus among the student body and excitement about that. Our enrollment is increasing,” he said. “We’re really at the threshold of revealing to the city what a fine university we’ve got sitting back here. As they drive up and down 59, they’re going to get an image that’s totally transformative from what’s there today.” 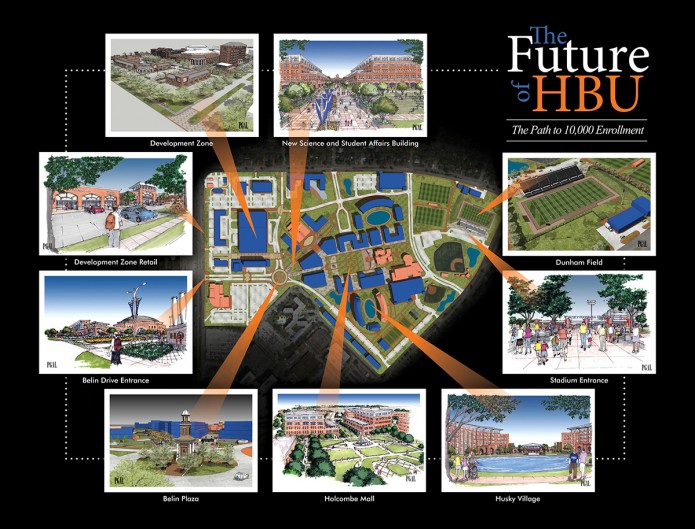