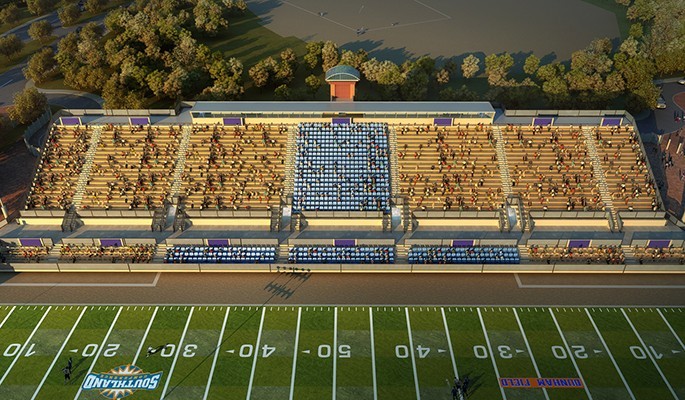 “Janice and I believe HBU is one of the leading universities in Christian higher education; we also recognize the values of football and as such, see this as a worthwhile contribution to continue that excellence,” Robert McNair said. “As we’ve seen with the Texans, the sport of football provides a rallying point for the whole community. We see that same dynamic taking shape at HBU, and we are proud to be part of it.”

“Robert and Janice McNair have been long-time friends of HBU, and we are grateful for their support and generosity,” Sloan said. “This gift will make a significant impact toward our football stadium, as well as to the entire University.”

HBU’s playing surface, Dunham Field, as well as the buildings that comprise the HBU Football Complex, were installed during the summer of 2013. Construction on the stadium’s seating, ticketing and press box areas is scheduled to begin later this month, and the McNairs’ gift will aid in the completion of those projects.

The gift continues a long and generous history of giving to the University from the McNair family. Previous contributions to HBU were used toward the construction of McNair Hall, the campus’s premier banquet and reception venue, in the Morris Cultural Arts Center, as well as donations to the School of Education. Through The Robert and Janice McNair Foundation, the McNair’s have given generously to countless charitable, scientific, literary, educational and religious organizations. Robert McNair serves as chairman of the foundation, as well as The Robert and Janice McNair Educational Foundation and the Houston Texans Foundation.

Robert McNair is chairman of The McNair Group and is responsible for bringing the National Football League back to Houston, serving as founder, chairman and CEO of the Houston Texans, since the franchise’s inception in 1999. He also revived a collegiate bowl game in Houston in 2006 as founder and now chairman emeritus of the Texas Bowl.

HBU head football coach Vic Shealy announced the program’s second National Signing Day class at a press conference on campus Wednesday. The Huskies expect to open the 2014 campaign, their first official season as an NCAA Division I FCS competitor, at home against McMurry on Sept. 6 at the new stadium, which has yet to be officially named.