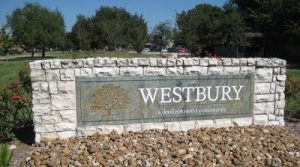 Westbury was founded in the 1950s as a 5,000-home suburb in southwest Houston, and remains the city’s second largest subdivision, after the 7,500-home Sharpstown development founded around the same time. “Back in the late fifties, when they were planning these areas, they just thought bigger was better,” said Becky Edmondson, the president of the Westbury Civic Club. “After that, subdivisions became smaller.”

In the 1960s, hundreds of young families moved to Westbury, attracted by affordable prices, good schools, and proximity to the Medical Center and universities. Edmondson’s own father, a geologist, moved his family to the neighborhood in 1961. Over the next few decades, desegregation gradually brought an influx of people from many different races and nationalities into the mostly white subdivision, but Westbury didn’t experience the widespread “white flight” suffered by neighborhoods like Sharpstown.

“People liked their houses, they liked the location,” Edmondson explained. “The color of their neighbors’ skin didn’t matter.” Edmondson herself bought a house in Westbury in 1979, and remembers a neighborhood bursting with diversity.

“My neighbors two doors down were from India,” she recalled. “Across the street was a doctor from Mexico doing his residency; at the corner was an African-American family. All the kids were out playing in the street, and I don’t think they noticed. And my street wasn’t unique in Westbury.”
Last year, the Westbury Civic Club celebrated its 60th anniversary. From the beginning, the association has been devoted to improving the quality of life in the neighborhood. Since 1980, it has contracted with Precinct 5 to provide supplemental security patrols from the Houston Police Department. In 2010, it helped create a community garden, one of the largest in Houston, and it has planted or given away 6,500 trees over the past decade.

“Most people don’t realize the incredible number of hours that volunteers donate to the neighborhood every month,” said Edmondson, who has served as the club’s president, an unpaid position, for eight years. “The sheer volume of work that goes on would surprise many people.”

Among the club’s points of pride is its monthly newsletter, the Westbury Crier, which it has published without interruption since July 1956 when it started off as a single-page broadsheet. One of the things that makes Westbury unique, Edmondson said, is how many families have lived there generation after generation
“In the 1980s we had a new group of people moving in, people who grew up in the area and wanted to live near their parents. Now, forty years later, we’re starting to see that same young demographic, families with children, moving back in. That’s what makes this neighborhood so special.”