Looking Back at Public Safety Success in 2017

2017 was a year of change for the Brays Oaks District Public Safety Program. In 2017, the district expanded to add a Private Security patrol for our retail centers, as well as enhancing its relationship with the Houston Police Department, and participating in Mayor Turner’s Meaningful Change program for the homeless.

“We have spent a lot of time on beautification; picking up trash, reporting malfunctioning street lamps , mowing storefronts and general clean up in the District to improve the perception in the area,” explained Starla Turnbo, chair of the Brays Oaks District public safety committee. “We’ve always done graffiti removal, lighting, and trash removal. We mow the medians and plant flowers and trees in the medians. It’s a holistic view of public safety, and encourages people to take care of their neighborhood.” The District’s graffiti abatement team removed graffiti from 309 sites this year as part of this initiative. Abatement also works as a preventative measure, discouraging future graffiti by providing for quick removal.

In addition to beautification projects, this year the District hired S.E.A.L. Security to patrol the District’s retail centers and talk with business and commercial property owners on a frequent basis. “They go out and actually engage with people, and say ‘Hey if you see something that feels wrong to you, give us a call and we will come investigate,’” said Turnbo. “They came in mid-year. Now they’re kind of a household name. District retailers have a dedicated phone line to SEAL and call for assistance anytime should the need arise. S .E.A.L.’s record is a testament to their responsiveness. Over 400 calls were answered in the six months that they have worked in th 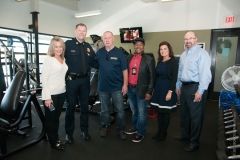 e Brays Oaks District. In addition to providing S.E.A.L.’s private security patrol, the District also funded security cameras for 29 unique locations across the area, enhancing both S.E.A.L.’s and the Houston Police Department’s ability to monitor and respond to potential violations.

That’s not the only way that the District is working with the Houston Police Department. In late 2017, Captain Craig Bellamy came to the District with a special request for funding for gym equipment for the Gessner substation. The District approved $10,000 for the equipment. “Our assessment payers can be proud that some of their money went towards helping the police department. Whenever there is an issue, they have that relationship through [this funding] and through the P.I.P meetings,” explained Turnbo.

HPD officers also attend meetings in partnership with the District to discuss issues with property managers in Brays Oaks apartment communities. “They’ll describe what they see occurring, whether it’s car break-ins or home invasions, they give that information to all of us. And we give them information on what’s going on in the world of the District. So there’s an open line of communication between all of us, sharing that information,” Turnbo said. In addition to providing regular access and a relationship with HPD to the multi-family communities in the area, Brays Oaks District also funds Rental Credit Reporting, enhancing the level of information that property managers have on potential tenants and enabling better risk management.

These partnerships have greatly enhanced attendance at public safety committee meetings. Local homeowners, business owners, vendors and concerned citizens fill meetings, bringing new ideas and engaging their local communities in the District in new ways. “When I started chairing public safety, maybe three people would come, including myself. Now, the room is packed,” said Turnbo. “A lot more people are engaged in the process now, and it makes a big difference.”

The Brays Oaks District is also participating in Mayor Turner’s Meaningful Change program. This initiative is a holistic program intended to combat panhandling in Houston through partnerships with local organizations that provide shelter and other services for Houston’s homeless population. Meaningful Change encourages Houstonians to give to these programs rather than to individual panhandlers , creating more meaningful change through funding social services and case workers.

Finally, the District has developed a close relationship with Harris County District Attorney Kim Ogg and County Attorney Vince Ryan. The District has a special contractual relationship with Vince Ryan through the County Attorney Community Protection Program. The District (along with two other management Districts) funds a full time Assistant County Attorney to address Nuisance abatement through Chapter 125 of the Civil Practice and Remedy Code. Through this partnership, several businesses have been closed down for violations or brought up to code, enhancing public safety in Brays Oaks. “We are just making sure to look into businesses, make sure they are operating correctly and holding themselves to good standards,” explained Turnbo.