WATCH THE CELEBRATION ON ABC13!
Houston’s signature patriotic celebration is back with a 2020 approach. As a result of the rising COVID-19 positive cases and hospitalizations, the City of Houston’s July 4th celebration will be a virtual event. Shell Freedom Over Texas will feature an exciting line up of live and virtual entertainers via broadcast and live streaming from 6:30 p.m. – 10 p.m. Although this year’s celebration will be different, our mission is to uphold the health and safety of all Houstonians. This year, guests will not gather for the annual festival on Buffalo Bayou in Eleanor Tinsley and Sam Houston Parks, but you can watch the event safely in your home. I’m looking forward to the fireworks display after the show, presented by Reliant Energy.
Please remember fireworks and celebratory gunfire are prohibited in the city of Houston and extremely dangerous. Today, July 3rd is the official city of Houston Holiday and our office will be closed. Celebrate safely and enjoy time with your family! 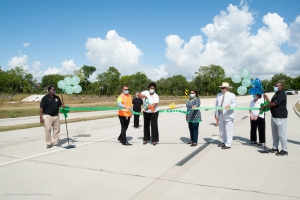 Friday, June 19th, we held a small but significant ribbon cutting celebration to mark the official opening of W. Airport from Hiram Clarke to Almeda Road. Unfortunately, due to COVID-19 we were unable to have a public ceremony but that did not stop us from commemorating this occasion in District K fashion. Check out the video created to commemorate this joint project. https://vimeo.com/430900504
This newly built 2.5 mile, east/west connection consists of a 4-lane divided (raised median) concrete pavement, concrete curb and gutter, signing, pavement markings, storm sewers, drainage ditches, retaining walls, new signals and illumination coming soon. The project also includes 6’ sidewalks a dedicated bike path, two new bridges: C-146 Channel and C-161 HCFCD Channel, two new ponds and landscaping along the roadway and around the ponds. The total cost of the project was $22,634, 383. 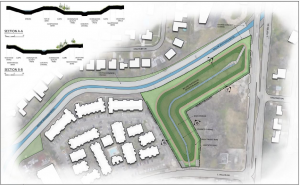 HOUSTON, TEXAS – The Harris County Flood Control District is set to begin construction on a stormwater detention basin located at Willow Waterhole Bayou upstream of South Post Oak Road to reduce the risk of flooding in the vicinity of the basin. Harris County Commissioners Court issued a notice to proceed on the project on June 9, allowing the project to begin construction in the coming days and is expected to take three months to complete. The project location was selected in coordination with the City of Houston.
“This is an exciting project! Anytime we have the ability to reduce the risk of flooding of homes and businesses, we are improving the quality of life for our residents. This area deserves the relief this project will provide after repeatedly flooding over the past several years. The construction of this detention basin is a testament of the power of partnerships and community engagement,” said City of Houston Vice Mayor Pro-Tem Martha Castex-Tatum.
The new basin will hold approximately 17.6 acre-feet (nearly 5.7 million gallons) of stormwater during heavy rain events.
“After years of historic flooding, Harris County is on the path to providing equitable flood protection, which will help keep families out of harm’s way during the next flood. The need is particularly felt along Brays Bayou, where more homes flooded than in any other corridor in Harris County during Harvey,” said Harris County Commissioner Rodney Ellis. “Moving forward with projects like Willow Water Hole Bayou will provide meaningful, long-overdue improvements that will give families along Brays Bayou peace of mind.”
The contractor will use heavy construction equipment such as dump trucks, excavators and bulldozers to remove trees, vegetation and excavated soil. Motorists are urged to be alert to truck traffic when passing near construction access points.
To date, the Flood Control District has made more than $400 million in improvements in the Brays Bayou watershed – primarily through Project Brays, a cooperative effort between the Flood Control District and the U.S. Army Corps of Engineers. For project information and updates, visit www.hcfcd.org/. 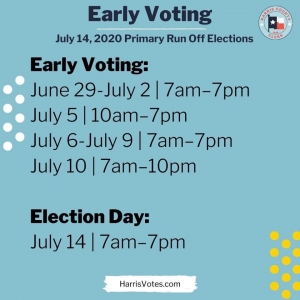 Early Voting is Going on Now

Print out your sample ballot and head to the nearest polling location to vote in the July 14th Primary Run Off Elections.
Fort Bend residents go to www.FortBendVotes.com for more information and Houston residents go to www.HarrisVotes.com.
The Harris County Clerk’s office is committed to ensuring that voters will not be putting their health at risk when voting. Temperature checks, wipes, finger covers, voting booths spaced out and one way in and out are some of the safety precautions being taken. Remember you can vote at any open voting location during early voting and on Election Day.

CITY OF HOUSTON ANNOUNCES OVER $3M IN ARTIST OPPORTUNITIES 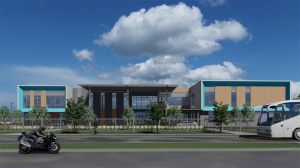 This week the City of Houston announced its plan to acquire over $3M in artworks for public sites city-wide from Houston Area and Texas artists. Artists and artist groups state-wide can now submit qualifications and art proposals to be considered for the city’s Civic Art Collection at Houston Airports. Additionally, artists in the Greater Houston Area are invited to submit qualifications to create site-specific works for the City’s forthcoming Sunnyside Multi-Service Center.
The advancement of these opportunities, which prioritizes equitable economic support for artists and art organizations that have been heavily impacted by Covid-19, has been coordinated to help meet their needs.
“Two months ago, we announced new art for the Alief Community Center, and we now have new projects coming to Sunnyside and the City’s airports,” said Mayor Sylvester Turner. “While we fight against the health impact of the virus, we are also fighting the economic effects with these new investments.”
Full Press Release

The City of Houston’s response rate is 52.3%. The latest Census report shows 8 Houston districts (E, K, C, G, D, A, F and B) have response rates higher than 50%. The City of Houston still lags behind Harris County, TX and the national average, but districts K, E, D, C and G are still outperforming the rest of the state. The overall self-response rate in the US increased from 61.6% to 61.8% between June 22and June 28th. District K improved from 56.5% to 57%. Find your census track and see how your neighborhood is performing. To view an interactive version of this map visit: januaryadvisors.com/census-2020-houston-response-rates/
It’s not too late, you can still complete the census today. It has never been easier to respond on your own, whether online, over the phone or by mail- all without having to meet a census taker. Today you can respond online, by phone or by mail. Hundreds of thousands of temporary census takers will use smartphones to follow up with households that don’t respond. Say YES to Census 2020. www.my2020census.gov or call 844-330-2020 to complete over the phone. 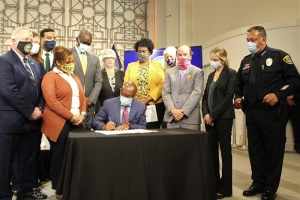 Last month, Mayor Sylvester Turner signed Executive Order 1-67 on Policing Reform: Use of Force, which applies to all police officers in the Houston Police Department.
The EO covers the police department’s response to resistance, de-escalation, use of deadly force, prohibited techniques, and no-knock warrants. For the first time, it codifies prohibited techniques, such as neck restraints or chokeholds, which cannot be used unless objectively necessary to prevent imminent serious bodily injury or death to the officer or others.
“Officers shall not place their knee, foot, or body weight on the neck of a suspect to control or contain the suspect’s movement,” Mayor Turner said. “We believe that taking all these things in collaboration can help restore and maintain the confidence of the general public. We want the public to know that we are responding and listening to their concerns and taking some immediate steps, which we believe will create a much better system for everyone.”
“Our collective voices have led to collective action by our city. We are committed to doing the work that leads to meaningful and actionable reform,” said Vice Mayor Pro-Tem Martha Castex-Tatum. “We started this work before the unfortunate death of George Floyd. We are committed to reform, and we will not stop until we make Houston a place we are all proud to call home.”
“I want to say thank you on behalf of 5300 police officers,” said Chief Acevedo. “This is a huge day because you are building trust and building legitimacy and breaking down even the perception of bad policing. When we have these good policies, we build trust, and when we have trust, we build better communities.”
The executive order signed by Mayor Turner includes aspects of the #8cantwait campaign.
Work on strengthening the bond between police and the public will continue through the Mayor’s Task Force on Police Reform, and continued work and input from city council members. The 45 member task force will be led by Laurence “Larry” Payne, the Director of Strategic Partnerships, Civic Engagement, and Critical Conversations for the Houston Public Library.
The task force will make recommendations in training, use of force, police oversight, and interactions with the community. The official charge of the Mayor’s Task Force on Policing Reform is to:
The Mayor’s Task Force on Policing Reform will meet for the first time during the week of July 6 and have up to 90 days to submit its recommendations.
A complete list of members is here 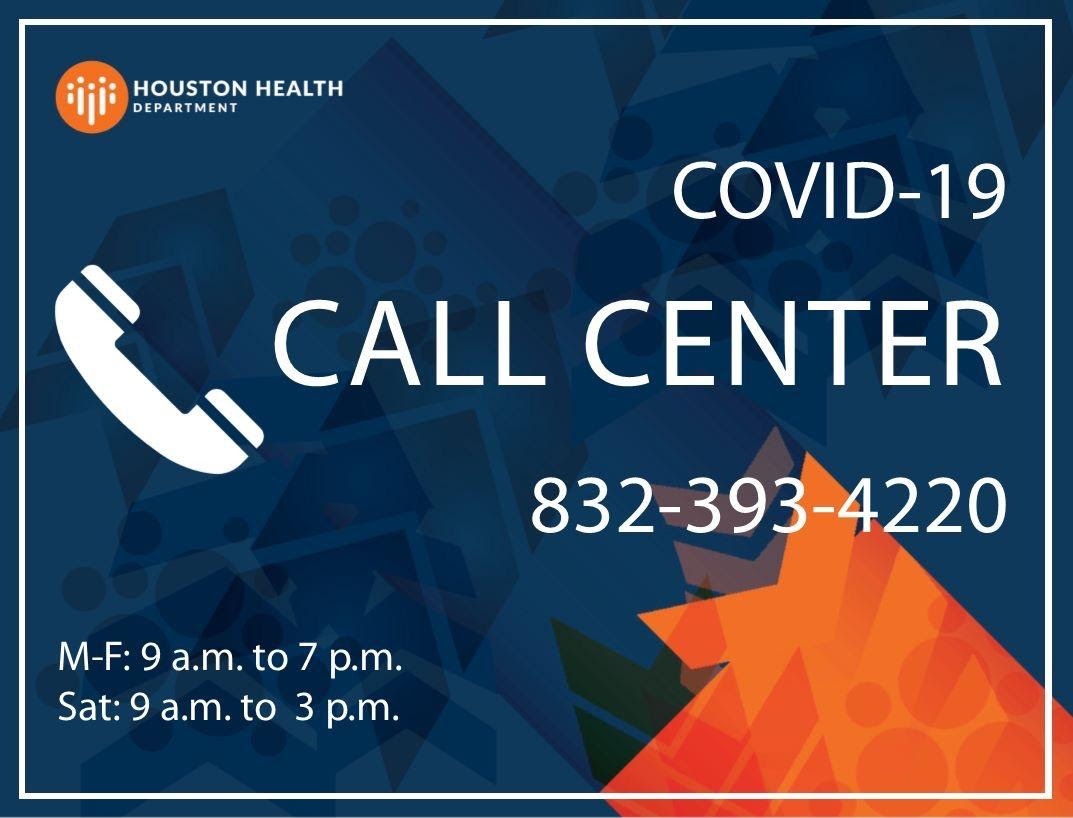