Skip to content
Home/Articles/Mobility & Transportation/Part of Fondren set to be widened to six lanes with drainage, lighting improvements

Part of Fondren set to be widened to six lanes with drainage, lighting improvements 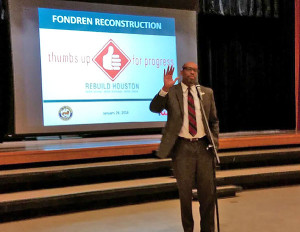 About 60 members of the Brays Oaks Management District community came to meeting at Fondren Middle School on January 26, armed with questions about the impending Fondren Corridor Reconstruction Project.

Most of the questions from the audience concerned drainage issues and flooding mitigation, but others addressed lighting, sidewalks, crosswalk signals, the preservation of trees in the median, access to businesses facing Fondren, and traffic cutting through residential neighborhoods during construction.

The Capital Improvement Project is one of several components of the ReBuild Houston Program within the city’s Department of Public Works and Engineering. The design phase began in 2015 for widening a 2.2-mile stretch of Fondren from four lanes to six between West Airport and South Braeswood Boulevards. Room for the expansion would be taken from the median, and sidewalks would be widened to six feet. Construction is set to occur in 2018 and 2019 and completion is estimated for 2020 or 2021.

The design renderings on display in the school’s auditorium lobby are “not set in stone,” Green said, emphasizing that the purpose of the meeting was to get public input so problem areas could be identified and addressed, and a follow-up meeting would ensue.

Carol Haddock, Senior Assistant Director in PWE, answered most of the audience’s questions, and assured them that at least two lanes of the roadway would always be open during construction.

“It is our desire to minimize disruption––even though construction itself is disruptive,” Haddock said. She emphasized that the reconstruction project was designed to bring existing lighting and traffic signals up to code and for the roadway to endure “for another 50 years.” 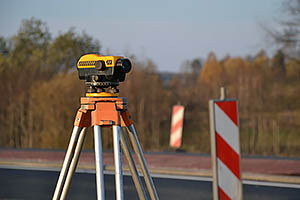 Due to her background working with the Harris County Flood Control District, Haddock said she understood the need to address Fondren’s drainage problems, which is a key part of the project. Some of that flood mitigation would have to be handled with larger underground drainage pipes and by utilizing detention areas. She said the PWE team would continue working with the Flood Control District to coordinate efforts and already meets with them once a month.

When a question was raised about the brightness of LED streetlights causing nighttime glare and a potential safety hazard, Houston City Councilman Larry V. Green of District K said now is the time to talk about upgrades and changes. He suggested the Brays Oaks Management District Beautification Committee might be able to find the funding for lighting upgrades.

He also suggested that the problem of drivers speeding through residential areas to bypass construction might be alleviated by petitioning the Fondren Neighborhood Traffic Management Program to provide speed cushions.

Five intersections along the project site will benefit from new signals, pedestrian ramps, and a reduction in congestion, according to PWE plans. Those include West Bellfort, Portal, Creekbend and Willowbend, Dumfries, and South Braeswood.

ReBuild Houston is a funding source approved by Houston voters in 2010 and takes a “pay-as-you-go” approach to infrastructure improvement projects instead of accruing more debt, explained Rob Lazaro, ReBuild Houston Executive. The program employs a data-driven system to decide which areas have the most urgent need for improvement projects, he added.