William Rivas recalled his first meeting with members of the Westside Explorer Program five years ago.  Looking around the room, the then-14-year-old Elsik High School student nervously noticed guys who were four or five years older, taller, seemingly so self-assured, and the room swelled with their camaraderie.

The young men now have all aged out of the Houston Police Department’s Explorer Program, which allows youths ages 14-21 to see the ins and outs of a police department. Rivas said that some of the guys now are working in law enforcement, while others are in the military. He has stayed in touch with some of the former Explorers. “Two in particular,” he says. “It’s hard to explain, but in some ways, we’re closer than brothers.”

Now, 19-year-old Rivas is a senior member of the Westside Explorers and a “lieutenant.” A central part of the hands-on program is role-playing. When he signed up to be an Explorer, he started out as an “actor” playing the bad guys in various scenarios, such as traffic stops, robberies, and bomb threats. Rivas quickly moved up the ranks within months and was promoted to officer, then sergeant, and now lieutenant. Captain is next.

The Westside program is one of 13 Houston-area Explorer Posts in the Law Enforcement Exploring program from Learning for Life, a non-Scouting subsidiary of Scouts BSA (formerly Boy Scouts of America). Every Tuesday evening, Rivas spends several hours helping to lead the Explorer class at HPD’s Westside Command Station on South Dairy Ashford Road. This is despite his hectic schedule. After graduating from high school, Rivas joined the U.S. Air Force Reserves. He reports to San Antonio’s Lackland Air Force Base monthly and works part-time as a security guard while earning a degree in criminal justice at Houston Community College. 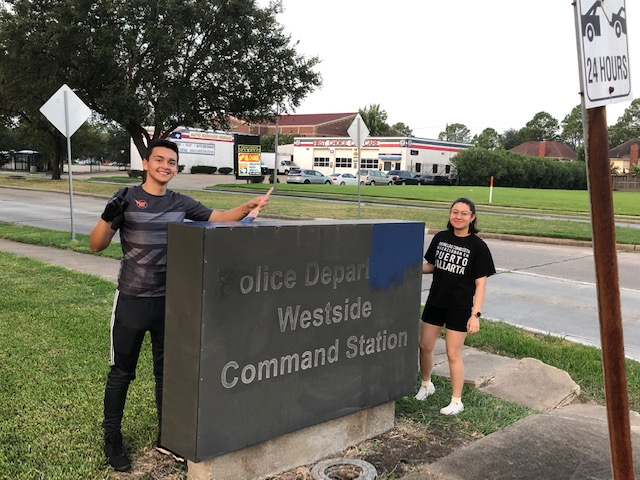 Rivas (in photo with a fellow Explorer) looks forward to the meetings, sharing and explaining to younger Explorers the police procedures he learned from HPD Officers Mike Prause  and Andres Hernandez, who oversee the Westside Explorers.

“My dad is in jail,” Rivas says. “So, Officers Prause and Hernandez are not only my instructors – they’re my father figures.”

Rivas recalled Hernandez showing up at his school when he got a 70 on his report card. The officer made him do push-ups in front of his classmates. Hernandez told him to do better on his next report card, but Rivas wasn’t embarrassed. He was just blown away that someone cared.

So, when they asked him to help spruce up the landscape around the Westside police station on a recent Saturday morning, Rivas and his fellow Explorers didn’t hesitate to show up five minutes before 6 a.m. Like lead Explorer advisor Prause frequently reminds them, “If you show up on time, you’re late.”

The Explorers spent five hours cleaning the grounds and painting directional signs, bike racks, and light poles. The work was nonstop, and at the end, they were covered in blue paint. Their reward? All-you-can-eat pizza.

Last year, they helped an elderly woman with dementia clean up her overgrown yard. Throughout the year, the Explorers volunteer at schools and neighborhood events, including Special Olympics, 5K charity runs and even funerals.

Community service and outreach help bridge the divide between the police and the neighborhoods, Prause says.

That is more important than ever, says Rivas, who grew up distrusting the police. For him and his relatives, the Explorer program helped “shine the light” on police work, adding, “It’s more than just arresting people.”

Rivas hopes to be accepted into the police academy six months before he turns 21. Police officers are required to be at least 21. Only about 15 percent of hundreds of applicants are accepted into the academy, Prause says, but the extensive hands-on and on-site training helps give Explorers an edge.

Prause boasts that since its inception in 2014, the Westside Explorer has produced five police officers and 17 active military personnel. The Explorer Program at the Westside Command Station is accepting new members, who will need to maintain a passing grade and be vetted. For more information, email HPD Officer Mike Prause at michael.prause@houstonpolice.org or call him at 832-394-5711.

In consideration of updated government orders aimed at stopping the spread of COVID-19, staffing of Brays Oaks District offices is limited at least through Dec. 31 while staff works remotely on a full-time basis. Staff may be contacted as follows: