Skip to content
Home/Articles, Community News, My Brays Oaks/Inside the ornate temple of a young religion from Vietnam

Inside the ornate temple of a young religion from Vietnam 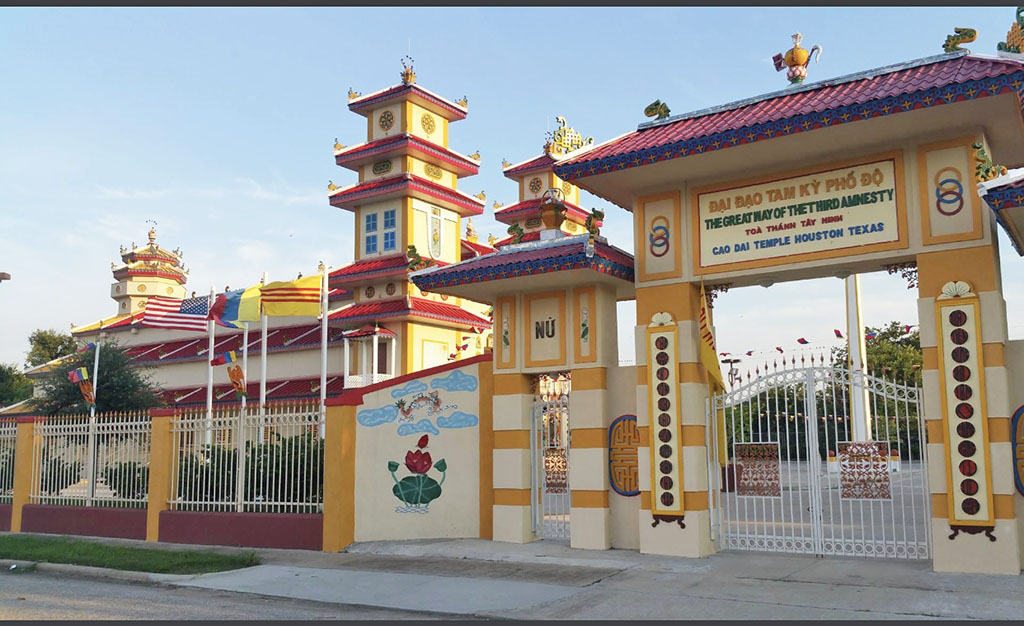 Just before noon, the Rev. John Tran smoothed his long, flowing white tunic and started the Sunday service in the Cao Dai temple a block north of West Bellfort Avenue. For 45 minutes, he led the congregation in prayers, mostly on his 58-year-old knees.

“The wafting scent of heaven stirs my mind. To the superior spirits, I respectfully pray,” the information technology specialist said in Vietnamese.

Upon hearing a gong, the nine worshippers, also dressed in white, dropped to their knees on ivory rectangle pillows. Their ardent, unified chants – even with a small group like this one – filled the huge chamber.

The hymns drifted across the parking lot. A passerby’s eyebrows rose in surprise. On weekdays, the temple appears deserted. Observers have wondered what lies behind the locked gates and ornate yellow building with tiered towers, upturn eaves and red roofs. Occasionally, beyond the murals of blue skies and pink lotus flowers, they catch a glimpse of Trung Trinh, 51, who cares for the property.

There are four Cao Dai places of worship in the Houston area, but the 7,500-square-foot temple in southwest Houston is the biggest and most ornate. Tran said only the Dallas temple is bigger in the United States.

Cao Dai is a young religion, founded in 1926 by Ngo Van Chieu, a Vietnamese civil servant for the French who received a vision from God to unite the world’s major religions. “We believe that all religions are truly one,” Tran said.

The numbers vary, depending on the source, but it is estimated that there are anywhere from 2 million to 6 million Cao Dai followers around the world.

A Cao Dai ceremony, like the building, is part-church, part-temple. Prayers and rituals are adapted from Buddhism, Hinduism, Taoism, Christianity, Islam and Confucianism. Devotees hear the teachings of Jesus Christ, as well as those of Lao Tsu. Its saints include Confucius, Joan of Arc, Victor Hugo, Muhammad, St. John the Baptist and Quang Am, the Buddhist Goddess of Mercy.

At the Cao Dai temple in Southwest Houston, most of the nine Sunday attendees are members of Trinh’s family. There are about 250 in the congregation, with many opting to pray safely at home during the pandemic, Trinh said.

In 2015, hundreds of people attended the opening of the $2.5 million temple, said Tran, adding that then-Mayor Annise Parker proclaimed that day “Cao Dai Day” in the city of Houston and expressed hopes that the dragon-adorned temple would become a local attraction, much like its imposing sibling in Tay Ninh, northwest of Ho Chi Minh City, Vietnam. That Cao Dai spiritual center in Vietnam annually attracts thousands of tourists from around the world.

The ceremony led by Tran is rhythmic, guided by the click-click sound of percussion sticks. In a sing-song voice, the worshippers prayed, pausing only a few seconds to catch their breaths and bow to the Divine Eye.

The altar in the yellow chamber with vaulted ceiling, painted sky blue with white clouds, is dominated by an intricate, gold-framed image of a glowing left eye, with rays of light emanating toward heaven and Earth. The all-knowing eye represents God. Around the altar lie tea, wine, flowers, fruits, incense, and yin-and-yang candles.

Before the coronavirus pandemic, about 40 people attended the service on Sundays, Tran said, not to mention the dozen or so who attend the weekday ritual. These days, the temple has scaled back to only Sunday worship, and Tran is gratified if eight or more show up.

Traditionally, Cao Dai practitioners are required to pray four times daily: At 6 a.m., noon, 6 p.m. and midnight. But in the United States, that is not possible.

“Everyone is working,” Tran said.