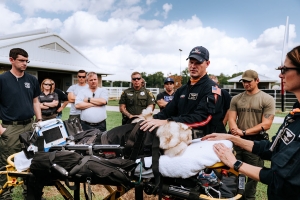 Two Braeburn West residents and a Westbury animal hospital are playing vital roles in an innovative program to save the lives of the brave and loyal dogs who help save ours.

Under the auspices of Memorial Hermann Hospital, Life Flight air ambulance services will soon be available to police pooches through the new K9 Casualty Care Course and Transportation Service program.

The program is the brainchild of one legend of the Texas Medical Center and the grandchild of another.

Before he passed away in 2015, Dr. James Henry “Red” Duke saved countless lives, and not just with scalpel and sutures as a trauma surgeon. The steely-eyed, mustachioed redhead with the heavy North Texas twang and Old West gunfighter’s visage was also skilled in the politics of medicine (it was he who saw to it that Hermann Hospital became Houston’s first tier one trauma center) and medical logistics. He also instituted Hermann’s innovative Life Flight air ambulance program, the first such in Texas and among the first nationally.

And even now, his healing powers are being extended beyond humans to the K-9 dogs who risk their own lives in police service. As of early December, Dr. Duke’s dream of extending Life Flight service to police dogs has at last come to fruition. It’s the first such non-military program of this type in the nation.

“Dr. Duke was a huge lover of dogs and cats and all God’s creatures and he put it out there that he wanted us to find a way to teach K-9 handlers and EMS paramedics and firefighters how to take care of injured canines,” says Aaron Young, a Memorial Hermann Life Flight paramedic and trainer and resident of Braeburn West. Under the leadership of Chief Flight Nurse Rudy Cabrera and Life Flight Outreach Education Coordinator George Tarver III, and along with wife Sandy Young, a nurse supervisor now for ICU COVID patients (and in her college days, a veterinary technician), he has helped implement and develop the K-9 triage training program.

After completing his own training in 2017, Young soon found out there was much work to be done in bringing the canine project to fruition. Police, firemen and paramedics knew little of veterinary medicine and had only the crudest of protocols for it. 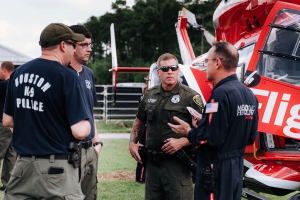 Luckily, the procedures and philosophy in treating injured humans and injured dogs differs only slightly. Aside from needing different facilities and the inability to converse with any of these patients, Young says the protocols are close to those used for human Life Flight, and the philosophy behind the program is identical.

“We do evidence-based medicine — we don’t make anything up, like ‘Hey let’s try this.’ That’s part of the best practices that go into being a number one teaching hospital and Level One trauma center.”

Many of the treatments are quite similar, too. EKGs, IV drips, blood pressure checks — all these are much the same between human beings and K-9s, Young says. As are the traumas: “We got a top ten list of injuries for K-9s and it was stabbings, shootings, heat exposure, falls, poisonings, stuff like that. And that’s what we based our training on.”

We Ride to Provide, an organization honoring fallen police dogs, has furnished the program with first aid kits that include tourniquets, wound-packing material, gloves, poison antidotes, and human-to-canine CPR masks.

Still, the operation called for slightly different processes. He and his wife and the others in the program conferred with veterinarians both civilian and military. “We even talked to military veterinarians who took care of special forces dogs,” Young says.

Once the first responders were trained, veterinary facilities on the ground had to be found. That’s where Westbury Animal Hospital comes in. Not only did Jeff Chalkley, DVM — one of their vets — help train the Youngs and other Memorial Hermann Life Flight personnel in the art of K-9 triage, he also has made his hospital available as one of the program’s three trauma centers. (A second, VERGI 24/7, is in Spring Branch and the third is at Texas A&M’s Veterinary Medical Teaching Hospital in College Station).

Because Westbury Animal Hospital lacks a dedicated helipad, it established an agreement with a nearby church to provide landing space — which brings us to that other legend of the Texas Medical Center. 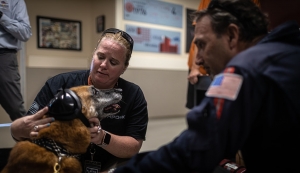 Years before moving to Houston, Dr. Michael DeBakey served the U.S. Army as director of the Surgical Consultants’ Division in the U.S. Surgeon General’s office. One problem that vexed him was time — the critical minutes between a soldier’s wounding and arrival on a trauma surgeon’s table. The key, he believed, was moving trauma centers closer to combat zones and enabling them to pick up and go lightning fast as battles raged over miles of terrain. His solution came to be known as Mobile Army Surgical Hospitals, or MASH units, which truly came into their own during the Korean War, when the Army combined this concept with air ambulance services provided by helicopters, where for the first time helicopters were a dedicated component of a military force.

And then those MASH units inspired a book, a movie, and one of America’s most beloved TV dramatic comedies, one that forever stamped into our culture images of medical personnel scrambling to dusty landing pads to meet helicopters full of battered GIs and whisk them off to the surgical tent, generally amid a barrage of antagonistic/comedic banter.

Life Flight, Duke’s civilian counterpart, also shaved life-saving minutes off the time spent between a civilian’s injury and arrival in an operating room. And that’s how Debakey’s innovation helped inspire those of Duke, who has now extended their lifesaving mercies to the brave and loyal K-9s of Greater Houston’s police.