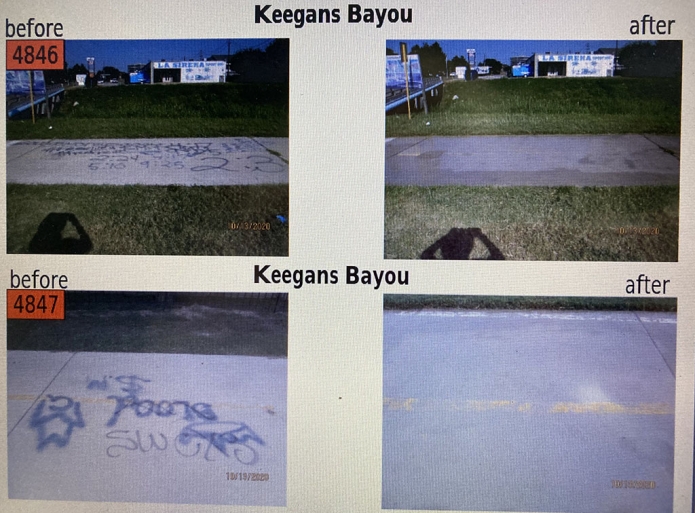 In every major city, wherever there is an empty wall space, one might find the not-so-special “artwork” of graffiti casting a blight on the surface. While some may think of it as wasted artistic talent, this type of nuisance and eyesore can pose a threat to public safety, or even subject an area to increased vandalism.

Regularly, Chavez’ team brings a truck into Brays Oaks with a variety of 60 colors of paints and special solvents to eradicate graffiti such as  gang “tags.”

“East End’s team has created a real niche for themselves in removing graffiti from so many neighborhoods and all over the city of Houston,” Brewer said. “They do really great work and generally, the graffiti stays gone once it is removed. They (graffiti artists) want visibility, and if there is a swift response to remove it, they do not get that visibility.”

Much of the graffiti these days is tied to gang activity, so it is more than a beautifying measure. It is in reality a matter of public safety.

“Certain language can be used to forecast a gang activity such as a hit in these tags that they leave, and this is reported to the gang unit of the Houston Police Department,” Brewer said. “The crews take before and after photos with date stamps, and share these photos with law enforcement.”

Sgt. Jose Juarez accompanied the abatement crew to take note of all gang tags. A total of 107 graffiti tags were removed and they have stayed absent from this part of Brays Oaks.

Martin Chavez, director of operations for East End Management has been overseeing the graffiti abatement team since it began 20 years ago.

“We do this service for multiple management (or improvement) districts, and for the City of Houston and the City Parks Board by contract, and we perform this service according to the amount of need in each area,” Chavez explained.

He is proud of the work his teams do in matching paint color and in restoring the surface to what it was before the graffiti incident. From brick, to stop signs, to painted surfaces, they try their best to do an exact match by using a “tint” machine to make sure paint colors match.

“It’s important that it looks good after we finish,” Chavez said.

Business owner Verna Blackwell, who owns a store in the shopping center in the 5900 block of South Braeswood, noticed an unsightly marking of “Savage” on a wall in the center. The team came out and within an hour, the mark was removed. She appreciated the quick response.

“This is a great service,” Blackwell said. “I am from California and graffiti was everywhere there. It is nice to see that it is taken care of here. The (graffiti removal) team came out and without interrupting any businesses, did a real good job.”