George Nwanguma spends his days much like he has spent every work day for the last 40 years, towering above young Hispanic mothers, African grandmothers, working men and women and children as they search for items such as the best-shaped squash or niche ethnic snacks from their relatives’ countries of origin. 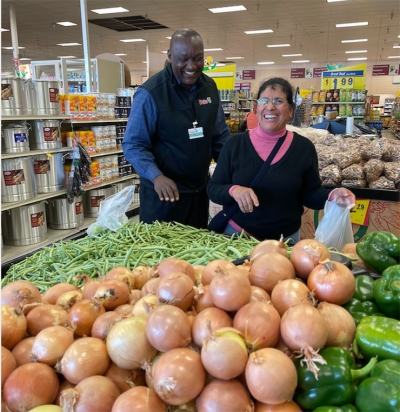 Nwanguma, a tall native of Nigeria, is store director of Fiesta Mart #24 at 11240 Fondren in the Brays Oaks Management District.

He helped open the store in the early 1990s. He’d begun work for Fiesta in 1983, stocking shelves and then at the cash register, at the store  at Bellaire and Hillcroft , while studying at Texas Southern University.

He was born 61 years ago into a family with 12 children in Port Harcourt, Nigeria,  and was determined to come to America, study at a university and work.

“I heard of Texas and TSU from one of my brothers. I traveled to Nigeria’s capital, Lagos, and got in line at the American Embassy. When I was lucky to get a visa to go to America in 1981 I felt like one does when winning the lottery. I still believe in America; we’re all winners by being here,” Nwanguma said.

“I got a flight to London and then Houston. I knew no one here and had never seen a pay phone before, (and) when I called the registrar at the university, it was a Sunday. By a miracle, he was in his office and helped get me to TSU. I studied. I found a grocery job for when I wasn’t studying and I worked hard,” he said.

Nwanguma began working as a Safeway supermarket clerk, then  switched to Fiesta. In 1985, Fiesta co-founder Donald Bonham asked Nwanguma for input on which African and Caribbean goods to stock as the supermarket chain expanded its reach to customers from all over the world.

Nwanguma earned his bachelor’s in business administration in 1986 and that year became a Fiesta front-end manager.

“In 1990 I became a store director. I earned a TSU master’s degree in public administration in 1991. I helped open this store in 1992 and eventually earned a UH MBA (master’s in business administration),” he said.

“My life has been Fiesta at Fondren, where I employ more than 150 local folks and oversee a $30 million budget, break records in year over year sales and I have seen generations of families grow,” he continued. “I have led family festivals, area crime prevention efforts, scholarship drives to help generations of students and holiday celebrations for the community.”

But, he added, “To me, most important was meeting Grace, my wife. She is my amazing Grace.”

Grace was born and raised in her husband’s Nigerian hometown and studied biology here. She earned a law degree and built a law practice. Together they have raised three daughters. The daughters have earned degrees from Houston Baptist University, Baylor, Texas A&M and South Texas College of Law.

“Fiesta at Fondren and my family are everything to me,” Nwanguma said with a gigantic smile — while watching everything at his store.