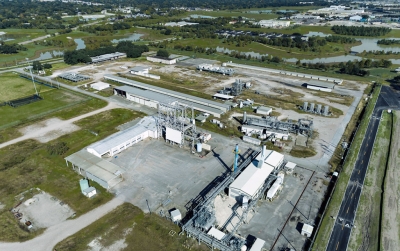 Big plans are in the works for the former Shell research facility on the edge of the Willow Waterhole Greenway in the Brays Oaks Management District.

The City of Houston bought the 28-acre site in October 2019 for building a detention basin for flood water. But thanks to closer study, the tract at 5822 Gasmer also holds promise for an additional mix of linked public uses, including an outdoor entertainment complex and a salute to the history of the oil and gas industry.

The city gave the District the responsibility of drawing up a master plan for the redevelopment of the site, where a Shell industrial complex of many structures, including an oil derrick, still stands.

“No actual drilling was done at this property, it was used for training and research only,” said Ben Brewer, retiring executive director of the District. “It has been sitting empty, and its location next to Willow Waterhole makes it ideal to integrate the two properties.”

The District is preparing to host a series of public meetings in early 2022 to gather feedback about the re-development project.

After funding a survey of the Shell site, the District is developing the master plan with Lionheart Places and Natalye Appel + Associates Architects.

Brewer said the plan will lead to a major boon for the area, bringing in business and community activity. Eventually he said, the fences separating the Greenway and the Shell parcel will be taken down so one site will feed off the other.

“We see this being re-purposed as a lifestyle center,” Brewer said. “The four key components of this plan will be to honor the past history of the site; to serve as a detention area for flood waters; to place the Levitt Pavilion Houston, an outdoor theater, in this location; and to reuse and re-purpose the rest of the area.” 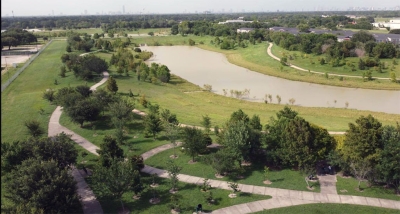 The Levitt Pavilion is seeded by the Levitt Foundation, which has established public pavilions, similar to Houston’s Miller Outdoor Theatre, in other U.S. cities.

In 2012, through the efforts of the Houston Art Alliance, the foundation selected Houston for a site. A Levitt Pavilion Houston committee was formed, with local resident Howard Sacks serving as chairman.

“The Levitt Foundation supplies a portion of the annual operating budget for 30 years,” Sacks explained. “The committee we have formed is now looking for about $5 million in funding to build a 5,000 seat state-of-the-art music pavilion. Each year, 40 free professional and diverse concerts will take place there.”

Backers hope the pavilion will open sometime in 2024 on two or three acres and share parking, restrooms and other amenities with the redeveloped Shell space. For more information, visit www.levitthouston.org.

Lionheart principal Jamie Larson is excited to be part of re-imagining  the former Shell site. She has toured the facility and has ideas for many uses for the space.

“We want to honor the Houston role and heritage of the oil and gas industry, and also weave together nature, to create a space where many opportunities exist for people to interact with one another,” Larson said. “We envision many community oriented programs there, artist galleries, small businesses, craft maker spaces, and plenty of food opportunities as well.”

The socio-economic revitalization of a part of southwest Houston that has largely been ignored is exciting to the District and other community members and leaders. The Greenway’s dual purpose of retaining storm waters as well is a relief for many who have seen too many high-water events in the area.

But it will further serve to bring the community residents together at an easily accessible and flexible place.

“We want people to want to hang out and spend the day at ‘Gasmer,’ ” Larson said. “We are engaging the community and getting their input and ideas for the plan.”

Once the plans are completed, the planners’ next order of business will be to find funding sources for to match the vision.

Watch for further news on this project at the Brays Oaks Management District website.