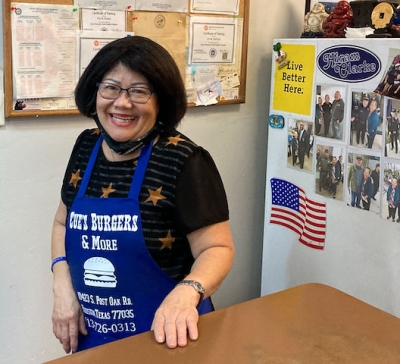 In the modest but large Cue’s Burgers restaurant, Vincent Morrison sat at a place of honor at the “regulars’ table.”

A good-deed-doer himself, as an advocate for military veterans,  Morrison found it hard to describe just how special and generous the restaurant’s owner, “Momma Cue,” is. Instead he pointed to a nearby wall of plaques and accolades that honor her deeds, most of which involve supporting first responders such as police officers who react to urgent calls in the Brays Oaks Management District.

“Just look right there and you will see just some of the great things she does,” Morrison offered. “I am honored to be a friend of this (Cue) family because that means you are part of their family.”

Momma Cue, real name Cuc Thi Roberts, and her son Keith Kendall own and operate Cue’s Burgers, located at 10423 S. Post Oak on a fringe of the District.

The sign maker did not understand her Vietnamese first name. That is how she became known as Cue instead of Cuc.

She and her son often sit with their extended family of friends at the special table, which has a nameplate honoring another friend: Houston police Sgt. Harold Preston, who died in the line of duty on October 20, 2020.

Momma Cue has had a special affinity for police officers since well before she opened her business in 1988. But she also extends her generosity and friendship to firefighters and other service workers and first responders.

More than a burger place with a huge breakfast menu and other hearty meals offered, Cue sees her restaurant as a way to give back to the community where she also resides. Giving back means offering a large breakfast to any police officer finishing their night shift, when she cooks before dawn each and every day.

“I wake up at 2:30 a.m. seven days a week to make sure they have a good meal after their shifts,” Cue explains. “I don’t even close on Christmas because I have to make sure that everyone who has to work on that day gets a meal here.”

She charges first responders a very small fraction of the food costs.

“The police officers have always put the word out to help get customers in the door, and that is how I was able to start my business and how even through hard times, they help keep me going,” Cue said. 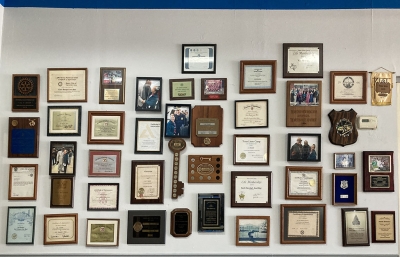 Cue operates the eatery even in the most inclement weather, such as during Hurricane Harvey, when she kept cooking with her gas stove to feed anyone needing nourishment. She waited so long to leave her place during that storm that she had to be rescued by boat.

During the freeze in February 2021, as well as after any disaster, Cue sees it as her duty to feed dozens of linemen and other utility workers who arrive in town to assist.

Years ago, Cue installed special power outlets for police officers using customized laptops to file reports. So many officers used her restaurant that it became known as a “substation.” She went as far as giving police officers keys to her business so they could use it whenever needed.

When the restaurant was recently burglarized and vandalized, and money was scarce due to reduced business triggered by the pandemic, she was unable to make the needed repairs. That led to her police officer friends starting a fundraiser through their union that raised $2,000 to help pay for the work.

“She is always there for us and we like to be there for her too, and she knows she can always count on us,” Senior Officer Mike Flores said. “They (Cue and her son) are like family to us all.”

Momma Cue helps others, too. For many years she has presented children’s Thanksgiving meal through the Lion’s Club.  She supports the club’s efforts in many other ways as well.

A self-professed “American success story,” Cue was an immigrant and “war bride” from Vietnam who escaped an abusive first husband and took her two children on a Trailways bus far away from their home in Ohio. One day in 1979, when the bus stopped in Houston, a thief snatched her purse. Without her wallet, she and her children had to stay here.

Westbury Christian Church gave her temporary housing and financial support until she could find a job. She decided to stay in Houston.

“I only wanted to work hard for what I had, I did not want any hand-outs, but they really helped me and my children,” Cue said. “I kept telling them, ‘Find me a job and put me to work.’ ”

Soon she was working at a burger place, where she learned the business inside and out and became manager.  She did all the buying, ordering and cooking. When that establishment let her go, one of her regular police officer patrons, a fan of her cooking style, wanted her to open her own restaurant. They partnered together and she found her location on Post Oak, opening on April 15, 1988.

She eventually took over sole ownership. Her children grew up helping her and now her grandchildren pitch in as well.

“I dreamed one day that I would have something – a business to give to my son and my daughter, and that they would never be hungry again,”  Cue explained. “All of my dreams have come true.”